To share your memory on the wall of Arlene Fechter, sign in using one of the following options:

Arlene was born and raised on the family farm in Campbellsport. At a young age, she was a nanny for neighbors. Then she and 2 other women operated the Mermac Hotel Dining Room in the current Washington House in downtown West Bend. She left the restaurant business and found a new career of raising her 3 sons. She used her cooking skills to feed not only her family but also multitudes of friends both in West Bend and at their cottage near Crivitz, WI. She was also a great seamstress making jackets for her boys and patching lots of knees. As her husband had his own business, Fechter Flooring, Arlene also became his secretary. They enjoyed many later years in Brooksville, FL, fishing, rummaging, gardening and playing bingo. Shortly after Raymond’s death, she returned to West Bend in 2016, making Cedar Ridge her home. She made many friends at the Ridge and promoted the facility to others. Some of her activities include exercise, weight training, Wii bowling, Mah Jongg and especially a nightly sheep’s head game.

The family would like to extend a sincere and heartfelt Thank You to the staff and nurses at Cedar Community for the kind and compassionate care given to Arlene. A special thank you to Annie, Hailey and Pam at Cedar Rehab
Read Less

We encourage you to share your most beloved memories of Arlene here, so that the family and other loved ones can always see it. You can upload cherished photographs, or share your favorite stories, and can even comment on those shared by others.

Plant a Tree in Memory of Arlene
Plant a tree 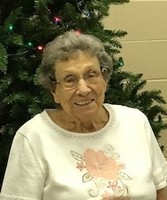