To share your memory on the wall of Arlene Norman, sign in using one of the following options:

Arlene Attended Ascension High School in Worcester, MA and the University of Massachusetts, followed by attending the Sorbonne Université in Paris to finely tune her love and knowledge of the French language.

She married her husband John in Worcester, MA in 1968. They moved to New York, Vermont and later Ohio. In the 1980’s she made her final move to West Bend, WI where she remained for 38 years in a community she was proud to call her home. Arlene enjoyed many friendships, was involved with community clubs and committees and was enthusiastically involved in the Republican Party of Washington County.

Arlene was an active member of the Rustic Road Readers Book Club. One thing Arlene liked better than reading a book was discussing it with a group of friends who were dear to her heart. She was an Endowment Member of the National Rifle Association and Member of the Wisconsin Chapter of Safari Club International. She was a lifelong French teacher and taught many young minds to “parlez francais”. Her last teaching position was at Cardinal Stritch University, a private Roman Catholic University in Milwaukee.

Arlene was a lifelong learner. It was her passion for truth that prompted her to attend a study group and become a member of Emmaus Bible Church. Arlene was baptized by immersion in 1984. Her faith sustained her through the most difficult times of life, and gave her confidence that she would one day be reunited with her beloved husband, John.

Arlene was a dynamic and active woman with many interests. She was a licensed pilot, owned an airplane and enjoyed sailing her sailboat on Lake Michigan. She had a loving heart for many stray cats, which she would look after. Her adventurous spirit brought her to travel and hunt with John on numerous trips in the Western US, Alaska, Canada, South Africa, Namibia, Zimbabwe, Spain, Austria, Hungary, Poland, Germany, and Czechoslovakia. Arlene had a number of trophy’s to call her own.

Arlene’s zest for life, wonderful stories of travel and caring nature for others will be greatly missed by all. She was a force to be reckoned with, as her friends would agree. We are all richer for knowing such a person as Arlene.

Funeral Services for Arlene will be held at 12:00pm on Saturday November 9 at the Phillip Funeral Home (1420 W Paradise Dr West Bend, WI 53095) with Rev. Ron Risse presiding. Visitation will be on Saturday from 10:00am until 11:45am. Interment will be at the Massachusetts Veterans Memorial Cemetery.
Read Less

To send flowers to the family or plant a tree in memory of Arlene Janice Norman (Latour), please visit our Heartfelt Sympathies Store.

Receive notifications about information and event scheduling for Arlene

We encourage you to share your most beloved memories of Arlene here, so that the family and other loved ones can always see it. You can upload cherished photographs, or share your favorite stories, and can even comment on those shared by others.

Posted Jun 14, 2020 at 08:09pm
We just found out about Arlene, thanks to our grandson who knows computers. We are so sad about this .We have tried to contact her for a year and a half at least. John is Phil's uncle on his Mothers side (Norman). We had such a nice visit with John and Arlene the last time they were in Illinois (it was for a funeral). Loved to hear all about the hunting adventures and see the pictures. We wish someone would have let us know. We e-mailed and called, but no response.
Phil and Vickie Phelps
1305 Eastern drive
Urbana, Illinois 61801-5338
Comment Share
Share via:
LE

Posted Nov 05, 2019 at 01:24pm
Arlene was an energetic, intelligent, and extremely accomplished woman. John and I were happy to know her as a neighbor and friend.
John and Heidi Dohmen
Comment Share
Share via: 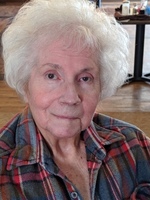