To share your memory on the wall of Bernard Hoppa, sign in using one of the following options:

On Thanksgiving Day in 1954, Bernie met the love of his life, Cecilia Danczyk while conducting the funeral of her grandmother. They were married in 1959, and just celebrated their 60th wedding anniversary on September 5th. He was in the funeral business for a few years and took a position with the American Automobile Association. After several years he became a counselor for the Archdiocese of Milwaukee Catholic Cemeteries. He held this position for thirty years and left in 2000. Since then he has been employed at the Schramka funeral homes in Milwaukee.

Bernie was a self-taught musician and played the marimba for over 65 years. While in high school he and several friends formed a band and played for all occasions. Ever since Christmas of 1972 he performed at St. Mary’s Immaculate Conception Church in West Bend for masses, on weekends, and many other occasions.

He is survived by his loving wife Ceil; two daughters, Geralynn (Rob) McElhatton, Karla (Mike) Graskey both of West Bend and his son Gerard (Jackie) of Granite Bay, CA. He has four precious grandchildren, Kyle and Quinn McElhatton of West Bend, Madeline Hoppa of Granite Bay, CA and Gavin Graskey of West Bend. He is also survived by his sister Juanita (Ed) Lemancik of Stevens Point, his brother Paul (Marie) of Sussex, and his sister-in-law Rita Hoppa of Orlando, FL. He is further survived by in-laws Regina Ecklund, Norbert Danczyk and Dennis Danczyk. He is preceded in death by his brother Frederick Hoppa of Orlando, FL, five brothers-in-law and three sisters-in law.

Bernie has been a member of the Loyal Order of the Moose since 1967 and has been an active member serving on various committees at St. Mary’s.

Bernie was very dedicated to his professions, always making an attempt to provide the highest quality of service to families he assisted throughout his years as a funeral director and counselor for the cemeteries. Bernie was known for his significant attention to detail and providing families with the extra attention needed during a difficult time.

In lieu of flowers, memorials in Bernie’s name to Make-A-Wish Wisconsin are appreciated in consideration of his special bond with his grandson, Gavin Graskey.
Read Less

To send flowers to the family or plant a tree in memory of Bernard E. Hoppa, please visit our Heartfelt Sympathies Store.

Receive notifications about information and event scheduling for Bernard

We encourage you to share your most beloved memories of Bernard here, so that the family and other loved ones can always see it. You can upload cherished photographs, or share your favorite stories, and can even comment on those shared by others. 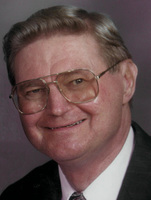