To share your memory on the wall of Betty Dobrzynski, sign in using one of the following options:

Provide comfort for the family of Betty Dobrzynski with a meaningful gesture of sympathy.

Print
Betty J. Dobrzynski (nee Peters), age 88, passed away peacefully at home on Wednesday, January 1, 2020 with family at her side. She was born on May 4, 1931 in Cheyenne, Wyoming to Alfred and Emma (nee Ritterstedt) Peters.

Betty is su... Read More
Betty J. Dobrzynski (nee Peters), age 88, passed away peacefully at home on Wednesday, January 1, 2020 with family at her side. She was born on May 4, 1931 in Cheyenne, Wyoming to Alfred and Emma (nee Ritterstedt) Peters.

Betty is survived by two children; Diane M. Murray and Cheryl L. Dobrzynski both of Plymouth, four grandchildren and four great-grandchildren. She is survived by a sister, Patricia E. Brown, of Kalispell, Montana as well as two sisters-in-law; Virginia Rettler and Ruth Ann Dobrzynski, both of Sheboygan Falls. She is further survived by many nieces and nephews.

Betty worked at R-Way Furniture Co. in Sheboygan for many years. Betty then worked at Bemis Mfg. Co. in Sheboygan Falls until her retirement at age 76 due to ill health. In addition to working and raising her family Betty was active in her church, bowling leagues, a Campfire Leader, a voracious reader and art projects were always close at hand.

A Funeral Service will be at 11a.m. on Monday, January 6, 2020 at St. Peter’s Episcopal Church, 104 Elm St., Sheboygan Falls, WI. The Ven. Rev. Michele Whitford, Vicar of St. Paul’s, Plymouth, will be the celebrant. Visitation will be at St. Peter’s in Sheboygan Falls on January 6 from 9a.m. until the time of the service. Private family Entombment will be at the Greenlawn Memorial Park Mausoleum, Kohler, WI later.

In lieu of flowers, memorials can be given for the Diocese of Fond du Lac Youth Summer Camp. Camping was something Betty supported for her children, grandchildren and great-grandchildren. As Betty was an avid knitter, memorials are appreciated for Heifer International’s Knitter’s Baskets which provide a llama, an alpaca, a sheep and an Angora rabbit intended to provide families with wool, milk, clothing and a sustainable income.
Read Less

We encourage you to share your most beloved memories of Betty here, so that the family and other loved ones can always see it. You can upload cherished photographs, or share your favorite stories, and can even comment on those shared by others. 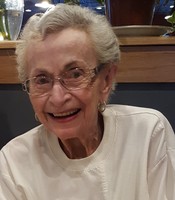