To share your memory on the wall of Bruce Kremer, sign in using one of the following options:

Print
Bruce Nicholas Kremer, age 63, was quietly called to Heaven on Monday, March 30, 2020 at his home in the Town of Trenton, WI.

Bruce was born June 2, 1956 in West Bend, WI; cherished son of Merlin and Darlene (Lahr) Kremer. He grew up on Skyline Drive riding mini bikes and motorcycles, shooting BB guns, swimming, fishing, kicking butt in the Cub Scout pinewood derby, being a big brother, and doing everything a growing boy should do. He attended St. Mary’s grade school and graduated from West Bend East High School in 1974.

In 1976, Bruce joined the United States Marine Corps Reserve completing his basic training in San Diego, CA. Bruce graduated with a marksmanship recognition and had the added distinction and privilege of carrying the American Flag during the graduation ceremony.

He married Julie Ciriacks on November 4, 1977. They were blessed with two sons, Bryan and Ben. In 1979, Bruce moved the family to Minnesota. For a while they lived in a rustic log cabin, eventually settling on a small 10-acre farm in Welsh, MN.

The perfect home to raise his boys, here they built a first class moto-cross track with lots of daring jumps and woops to play on and crash on. Kremer Fest was an annual event for racing old cars demolition style and then lining up the destroyed cars to jump over with their cycles. All this family fun honed their skills for many years of traveling far and wide to moto-cross competitions. Bruce was proud of the countless trophies his sons brought home.

It was in Minnesota where he started Fleet Dispatch. For nearly 40 years, he was in the trucking dispatch business and made many friends out of customers who not only appreciated his efficient ability to get loads shipped, but more importantly, relished his friendly, easy going ways, sense of humor, and gift of gab. Bruce moved back to his home roots of Washington County, settling in the Town of Trenton in 2008. He was able to work out of his home and continued to take care of his valued Minnesota customers.

Every spring, he took great pride in planting tomatoes and green peppers from seeds he had harvested the year before, babying them throughout the summer months and trash talking that his produce would be the biggest, best, and first to ripen. His other important spring endeavor was taking out “Barney”, his beloved purple Harley Davidson. He rode early in the spring, late into the fall, and, sometimes, even in the winter, loving every minute spent riding with friends on poker runs, destination trips, and just for fun trips.

Bruce had a quick wit, a mischievous smile, and no one was immune from his friendly and relentless teasing. He was easy going and could turn a tense moment around with his amazing sense of humor and warm laughter. Besides his family and his Harley, he loved beer, whiskey, work, guns, Gunsmoke, Word Feud, smoking, good friends, and women, although not necessarily in that order. He lived life on his terms and could be stubborn, refusing to listen to his mother or the doctors, or anyone else he didn’t want to listen to. He was an honest and straight forward person, telling it like it was.

At one time, Bruce was well known, and a little bit feared, for his legendary arm wrestling. Over the years, he won many state championships in multiple weight classes, left or right-handed. Welcome to the gun show!

He was a good family man, a faithful friend, a devoted son, a wonderful big brother, a cribbage player, a thoughtful gift buyer, a jokester, and, most recently, a loving grandfather. He often said he was an excellent driver and he loved to play sheepshead. Christmas won’t be Christmas without Bruce there in his signature Santa suspenders boldly buffing at seven and a half.

He is preceded in death by his father Merlin, cousin Don, Uncle Gilbert, Aunt Marie, and boxers Betty and Joe.
Read Less

To send flowers to the family or plant a tree in memory of Bruce N. Kremer, please visit our Heartfelt Sympathies Store.

Receive notifications about information and event scheduling for Bruce

We encourage you to share your most beloved memories of Bruce here, so that the family and other loved ones can always see it. You can upload cherished photographs, or share your favorite stories, and can even comment on those shared by others.

Posted Apr 06, 2020 at 06:47pm
Keith and Jeanne are planting this tree in honor of you, Bruce. We will miss you dearly. Rest In Peace good friend.

Posted Apr 06, 2020 at 04:06pm
Bruce, or Captain Underpants, as we fondly called him in our office was always a laugh on the phone. He would tease us that he was working in his underwear and shot us a picture of his 7 pairs of tighty whities laid out on his bed for every day of the week!! He would call and ask for "Bic," one of our dispatchers. I asked Bic, why Bic?? He said because she lights up my life- LOL!! He made life long friends with our drivers and us hear in the office. Such a down to earth, old school, great guy. We will miss his phone calls and friendship and will continue to tell Bruce stories for many years to come. Our sincere condolences to all off your family. He spoke of you all often- lovingly and jokingly;).
Sincerely,
Bruce's Friends at TTI Inc.
Eden, WI
Comment Share
Share via: 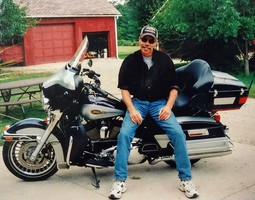