To share your memory on the wall of Cecilia Kroll, sign in using one of the following options:

She was a faithful member of St. John's Lutheran Church and enjoyed the visits from Pastor Schaser and Visitation Team.

A Funeral Service for Cecilia will be held at 4:00 PM on Sunday, December 16th at St. John’s Ev. Lutheran Church (623 Congress Street, Newburg, WI 53060). A visitation will be held on Sunday at the church from 1:00pm until the time of service.

Cecilia’s family would like to thank Cedar Community At Home Hospice for their wonderful care of our mother.
Read Less

To send flowers to the family or plant a tree in memory of Cecilia Katherine Kroll (Reinders), please visit our Heartfelt Sympathies Store.

Receive notifications about information and event scheduling for Cecilia

We encourage you to share your most beloved memories of Cecilia here, so that the family and other loved ones can always see it. You can upload cherished photographs, or share your favorite stories, and can even comment on those shared by others. 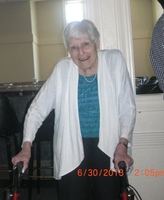