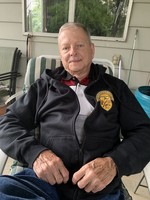 Dad was born on February 14th, 1942 to Casimira (Szyjakowski) and Charles Stehlik in Milwaukee. The family would later move to Iron Mountain, Michigan where Dad learned to ski jump. He would eventually return to West Bend and on a blind date met the love of his life Barbara Kumrow. They were married six weeks later at St. Mary’s Church on July 7th, 1962.

Dad worked for Kimberly-Clark as an over the road driver for 20 years and took great pride as a special deputy for the Washington County Sheriff’s Department. Ending his career as the Assistant Police Chief for the Village of Slinger.

Dad worked very hard so that Mom was able to stay home and care for their four children. He enjoyed being outdoors taking care of his yard and home. Dad looked forward to bow hunting at the trailer in Crivitz with his friends, fishing trips to Rock Lake in his boat, bartending at the Rod and Gun Club, and his monthly card night with his retired Police buddies all of which brought him such joy.

We would like to express our heartfelt thanks to Cedar Community Hospice and Rehabilitation for the compassionate care Dad received.

A special thank you to Deb Przedpelski, Casey Ganiere, and Bob Wells.

Dad requested that no service be held.