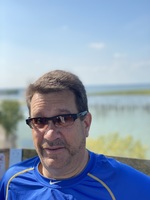 On Sunday, February 20, 2022 we lost a great man way too soon. A man who touched every person he ever met with kindness and respect. A man who lived in the grace of God. Daniel R. Maciejczak, of Kewaskum passed away surrounded by his family at the age of 58. Beloved husband of 34 years to Melyssa (nee Theesfeld). Loving father of Eric, Paul, and Amy. And a very proud grandfather to his best friend Kendall Faye Hager.
Dearest son of Marilynne (the late Thomas) Maciejczak. Loving brother of Michele (Craig) Weiss, Kurt (Mary) Maciejczak. Jean (Adam) Morzy. Dear son-in-law of Alice (the late Richard) Theesfeld and brother-in-law of Mark (Kathy) Theesfeld. Further survived by nieces, nephews, other relatives, and close family friends that are near and dear to our heart, the Koether family.
Dan had a huge love for music at a very young age! He started teaching himself piano at the age of 4. At 7 years old when he could read, he started taking lessons with Mrs. Sanflippo. Dan was a wonderful piano player and later a great organist. For 34 years Dan has played organ at various churches. He played with enthusiasm and utilized all the keys, petals, and pipes he could with the organ. He even played the xylophone in the Golden Eagles marching band during grade school while living in Greenfield. He sang in two choirs in high school further sharing his beautiful voice and love of music. He loved a variety of music throughout his life. He was known as “DJ Dan” providing tunes on every occasion. Dan also thoroughly enjoyed attending live concerts and sharing music with his children.
For anyone who knows Dan, spending time with his granddaughter was one of his absolute favorite things to do. Park dates, swimming in the pool, reading books, going to the zoo, and wrestling around…we could go on and on; there wasn’t a day that went by that those two weren’t giggling about something silly!
“God, Family, and the Green Bay Packers, in that order.” If Vince Lombardi had not said it first, Dan Maciejczak surely would have. To say that Dan was a “superfan” of Wisconsin sports would be an understatement. His house is covered in Wisconsin sports memorabilia wherever he could find a spot to sneak it in, in addition to the basement which was already his “Packers Man Cave”. Attending Bucks, Brewers, and Packer games with his family and friends were just a few of the many things he loved to do. Dan also thoroughly enjoyed watching WWE wresting and attending Canada fishing trip with his family and friends.
Not only was he a proud supporter of professional sports, but he was also avidly involved in his children’s sports programs and gave back by coaching grade school sports. From basketball to soccer Dan gave it his all to be the best coach and fan he could be for his kids, nieces, and nephews. Dan attended many of the family’s grade school, high school, and club volleyball, soccer, and basketball games as he could. He was always extremely positive and encouraging to the athletes, no matter what the outcome of the game.
Over the short years Dan graced this earth, he was a fantastic salesman working in automotive and new home sales. At the time of his passing, he was a district manager for Monro Auto Repair Shops; a career that he held very dearly to his heart.
Funeral services will be held Saturday, March 5th 2022 at Good Shepherd Evangelical Lutheran Church (777 S. Indiana Ave., West Bend) at 12 o’clock noon. Visitation at the church from 10am to 12 noon. Interment Private. In Lieu of flowers, memorials to the Good Shepherd Evangelical Lutheran Church Music Fund or to St. Paul's Lutheran Church in East Troy.