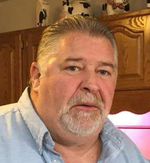 Daniel Joseph Swope Sr. age 54 years passed away unexpectedly on Tuesday December 24, 2019. He was born in York, Pennsylvania on February 27, 1965 to Joseph D. Swope Sr and Ruth Swope (nee Wonders). He was raised in Jackson, graduating from West Bend High School Class of 1984. Dan had been employed with Gruber Tool and Die, Metal Spinners for 13 years, and had worked for Washington County at the Samaritan Home in maintenance. Dan’s hobbies include watching the Packers, grilling out, swimming, riding mopeds, going to Wisconsin Dells, taking golf trips, playing card games. He especially loved to spend time with his family.

Dan was very proud of his children and the accomplishments they have achieved.

Dan is survived by his children, Daniel Jr. and Megan, his brother Joseph D. Swope Jr. the mother of his children Barbara (Mark) Kempf-Neuy, nieces, nephews other relatives and friends. He was preceded in death by his parents.

A Memorial Service for Daniel will be held at 6:00pm on Sunday December 29th at the Phillip Funeral Home Chapel (1420 W Paradise Dr West Bend). Visitation will be held on Sunday from 3:00pm until 5:45pm.