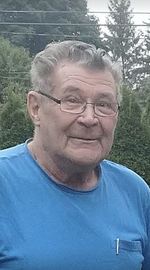 David "Dave" Mertzig, age 82, passed away on Wednesday, February 16, 2022 at his home in West Bend. He was born in his grandparents' home in Fillmore, on September 3, 1939 to Oliver and Leona (nee Mueller) Mertzig.

Raised on that farm, he grew to be the man that anyone who knew him, loved. His Catholic upbringing taught him to be faithful and caring. A member of St. Frances Cabrini Church for 55 years, he believed and followed the Golden Rule, treating everybody as he wanted to be treated (or better!) with respect, honesty, dignity, and kindness. He expected everyone else to do the same, yet was forgiving of those who weren't. He led by example to help others be better. He kept a positive attitude and offered encouragement, often saying, "Do your best; that's all you can do." and "It'll be alright."

Dave graduated from Kewaskum High School, where he was popular for his athleticism, friendliness, and good looks.

He was a hard-working man, starting out doing chores on the farm, earth moving for a construction company, working at the Fredonia foundry, and janitorial work at the old West Bend High School (now Badger Middle School). For over 25 years, he was employed as a foreman at the Gehl Company. He then spent several years working in purchasing at Maysteel in Allenton. He retired after working many years at Fleet Farm, where he enjoyed helping customers find what they needed, whether in his farm department, elsewhere in the store, or out in the yard. Farmers who shopped there routinely, often appreciated that he monitored quantities of items they would need, and ensured inventory was available in a timely manner.

Dave received an Honorable Discharge after proudly serving his country in the United States Army. While serving, he was stationed at Fort Leonardwood in Missouri, and in Darmstadt, Germany.

Instantly enamored after seeing a photo of Helen J. Milan, he began a brief courtship with her. Their wedding took place at Holy Angels Church in West Bend on April 27, 1963. They were married 49 1/2 years when she passed away in 2012. He carried that same photo of her in his wallet, and that love for her in his heart, every day of his life.

Dave loved his family and cherished time together. He regarded neighbors and friends as family too, saying, "There's no difference."

Dad enjoyed being around people and was always willing to help others in any way he could, sometimes even before being asked. From car repairs, yard and home maintenance, cutting wood, and clearing snow to lending an ear to listen or a shoulder to cry upon, you could always count on him to be there for you. He was an enthusiastic sports fan, participating as an athlete in community leagues in his younger years, and as a spectator- Brewers, Packers, Bucks, Badgers were favorites, but he also watched others, professional, college, or high school. He was locally famous back in the day for his pitching. He tried out for the Braves, and they wanted him back for a second try out, but his mother told him to focus on having a "real" job instead. While watching on TV, he often would call plays or make comments of stats or trivia moments before the announcer would say the same thing. He took pleasure in fishing, card playing, dice games, scratch-off lottery tickets, word search puzzles, collecting pens, and routinely tuning in to Jeopardy and Wheel of Fortune. In later years, Dad even learned to text so he could keep in touch with his grandkids. They adored hearing from Grandpa! He got a kick out of it too!

Easy going, kind, caring, loving, loyal, friendly, faithful... Dave was a shining example of Jesus' love for others. We were so very blessed to have known this wonderful man.

In lieu of flowers, memorials are appreciated to St. Jude Children's Research Hospital at www.stjude.org/donate , Disabled Veterans at www.dav.org/donate, Veterans of Foreign Wars at www.vfw.org/HelpOurHeroes, or any charity of your choice. Be kind and love one another.