To share your memory on the wall of Donald Frohmader, sign in using one of the following options:

Print
Donald E. Frohmader, age 90, passed away on Sunday, September 13, 2020 at the Aurora Medical Center Washington County. He was born on January 1, 1930 in Clifton, WI to Irvin and Frances (nee Kruppe) Frohmader.

Don is preceded in death... Read More
Donald E. Frohmader, age 90, passed away on Sunday, September 13, 2020 at the Aurora Medical Center Washington County. He was born on January 1, 1930 in Clifton, WI to Irvin and Frances (nee Kruppe) Frohmader.

Don is preceded in death by the love of his life Mary Frohmader (Thoennes) whom he married on June 3, 1961. Together they dedicated many years volunteering for Citizens’ Advocacy and St. Vincent DePaul. Ultimately becoming a Guardian for an individual with special needs, and serving as President of Washington County St. Vincent DePaul.

Don was born and raised on his family’s dairy farm in Clifton Wisconsin. After leaving the farm he served in the US Air Force during the Korean War prior to a long career as a lineman for Wisconsin Electric. In retirement Don pursued his true passion gardening, earning him the nickname “Farmer Frohmader” having a beautiful yard and providing fresh vegetables to all the neighbors in the subdivision. He was happiest when he was in the outdoors and loved spending time on the family farm hunting, fishing and making firewood.

The family would like to thank the following; the Honor Flight, staff at Meals on Wheels and BrightStar for their loving and attentive care of Don. The family wishes for donations to be made to the Kewaskum House of prayer.

Visitation will be at the Phillip Funeral Home Chapel (1420 W Paradise Dr. West Bend, WI 53095) on Saturday, September 19th from 9:00AM until 10:30AM. A Funeral Prayer will be said at 10:45AM with Pastor Joe Brath presiding with Military Honors to follow. Interment will follow at Pilgrims Rest Cemetery in the Town of Clifton.
Read Less

To send flowers to the family or plant a tree in memory of Donald E. Frohmader, please visit our Heartfelt Sympathies Store.

Posted Sep 21, 2020 at 12:35pm
Thanks for Don and Mary's involvement in St Vincent de Paul over these many years. Good examples of living disciples of the Lord. You and Lenore and the girls were so loved. will send a donation to SVDP

Posted Sep 18, 2020 at 10:56am
We have many happy memories of Uncle Don and Aunt Mary including family reunions, farm adventures, fishing at the creek, family vacations and family celebrations. I remember the laughter, fun and joy of our gatherings. Our love and prayers go up to Ken, Lenore, Heather and Kayla. You were and are your dad and mom's pride and joy. May all the happy memories help you through this difficult time. God bless you,
The Simmons Family
Comment Share
Share via:
EH

Posted Sep 17, 2020 at 09:25pm
My Deepest Sympathy to Ken & family on Don's passing. Many fond memories of Don when my brother's were growing up with Ken in the subdivision. Don & Mary were such a special couple & he is now reunited with her. Eileen (Maurer) Hanrahan
Comment Share
Share via:
RF

Posted Sep 16, 2020 at 12:47pm
Know that our thoughts are with you & family at this sorrowful time. May you know that your DAD is now with his Mary! I'd could see them both walking hand & hand together forever! Our Deepest Sympathy! My Sons & I will always have fond memories of them! Will surely miss them! With much love, Ana, Pablo, Francisco
Comment Share
Share via: 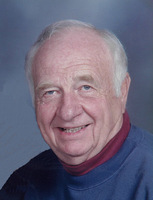