To share your memory on the wall of Donald Pryor, sign in using one of the following options:

Don is preceded in death by his son Dennis and his parents.

A Private Family Funeral Service will be at the Phillip Funeral Home Chapel (1420 W. Paradise Dr. West Bend, WI 53095) with Fr. Nathan Reesman presiding. Public Visitation will be at the funeral home on December 23, 2020 from 4:00PM until 5:45PM. Private Family Entombment at Resurrection Cemetery in Mequon. Masks and Social Distancing are required.

Memorials are appreciated to the Paralyzed Veterans of America (PVA.org) and/or the Washington County Humane Society.

A special thank you to Dr. Olaffson, Dr. Stewart, Dr. Barz, staff of Lombardi Cancer Center, Horizon Home Hospice team and nieces and nephews of the Schmitt family for all the help, care and support provided.
Read Less

To send flowers to the family or plant a tree in memory of Donald Andrew "Don" Pryor, please visit our Heartfelt Sympathies Store.

I will always remember your infectious laugh and how we bantered back and forth. I was so very honored to escort you on your Military Flight to D.C. and will remember how much you enjoyed seeing the Korean monument and the Changing of the Guard at Arlington Cemetery. Your enthusiasm to be with your fellow Veterans that day, and to share your military experiences will leave a lasting place in my heart forever. I will remember you always and pray that you will find everlasting peace in the arms of God. Love Sis & Roland
Comment Share
Share via:
DP

Posted Dec 23, 2020 at 08:45am
Dad was never a man of many words, he expressed his love through his actions.
He enjoyed gardening, planting trees, then chopping them down when they got too old.
He enjoyed fixing cars, and anything else that needed repairs.
Later in life, he enjoyed watching old movies, especially westerns, on television.
He taught me how not to be afraid to fix things, and do things for myself.
He would work his full-time job at American Motors, and then do side jobs, to provide for his family.

He was a Father, Veteran, and Husband.

He was somehow always watching over us, even when we thought he wasn't there, he was. For example, there was a time we were up by a lake swimming. I have forgotten the name. It may have been St. Germain, while he was doing a side job painting cottages for Van Walters. Dean who was just a baby, but old enough to walk. He was at the edge of a long pier, and he fell in the water. He was splashing for help. Dave and I ran as fast as we could, but Dad, whom we thought wasn't watching
flew past us faster than a speeding bullet to save Dean from drowning.

I remember, every year growing up, we knew it was getting close to school starting again. Dad would take us to Woolen Mills, a clothing store in West Bend. At Woolen Mills, we would all get a new pair of shoes, and some school clothes. It was the most fun, when my Dad would take his truck that had a Camper shell. We would all climb in the back, and sit on the plywood sitting area he built.

Dad wasn't the kind to accept help easily. He was the kind to be the first to offer a lending hand.
So special thanks for everyone that helped him during his last years.

Some of the things he spoke of over this past year :
He was a Proud Veteran of the Korean Conflict
He was Proud to be part of 2017 The Stars and Stripes Honor Flight
He openly expressed his Love for Ceil,
He was thankful for the Schmitt family members helping him over the past years.
Even while in pain, he showed interest and concern for his boys. Dave, Dean, and myself.

We Love him, and will miss him.

Posted Dec 18, 2020 at 09:19pm
I pray the love of God enfolds your family during this time of grief. With heartfelt condolences,

Posted Dec 18, 2020 at 08:24am
Our love and prayers are with you during this difficult time. He will live in our hearts and memories ! We can take comfort in knowing he is with God 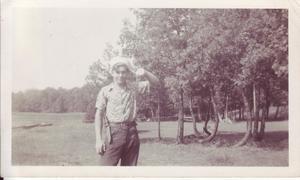