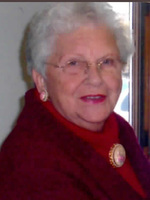 Edythe was the youngest of ten children and was preceded in death by her brothers Harold, Walter, Leslie, Edgar and Milton and her sisters Lillian, Esther, Avis and Delores. She is survived by one sister-in-law, June Weiss, and many friends and former neighbors. She loved her family and friends dearly, always looking forward to their visits and also to visiting them.

She and her family would especially like to thank her wonderful neighbors and her caregivers who were so good to her; she loved them all like her own.

Per her wishes there will be a private burial at Washington County Memorial Park in West Bend.

Until we meet again, loved you all!