To share your memory on the wall of Elliott Groth, sign in using one of the following options:

Provide comfort for the family of Elliott Groth with a meaningful gesture of sympathy.

Elliott enjoyed spending time with his family, traveling and interacting with people. He was an avid recycler and storyteller. Elliott and Barbara were owners of A&E Engraving and invested in real estate. He was a member of Fifth Avenue United Methodist Church, past President of Columbia Heights, MN Jaycees and the West Bend Jaycees. He was a lifetime member and past President of the Wisconsin JCI Senate.

Elliott is preceded in death by his parents, parents-in-law Felix and Marjorie Frye, brother-in-law Lyle Mohr and nephew Martin Neilson.

A special thank you to the West Bend Fire and Rescue, the staff of the ER and ICU at Froedtert St. Joseph’s in West Bend, Reverend Clarissa Martinelli and Chaplain Carol Burczyk of Allay Hospice.
Read Less

We encourage you to share your most beloved memories of Elliott here, so that the family and other loved ones can always see it. You can upload cherished photographs, or share your favorite stories, and can even comment on those shared by others.

Chris & Gayle Horneck, Love. Geraldine Foster and Rick Bond, and others have sent flowers to the family of Elliott S. Groth.
Show you care by sending flowers

Posted Oct 10, 2019 at 05:32pm
So many memories, haircuts, Jaycees...I had so much respect for him. May he rest in peace. Blessings to you and your family.
Comment Share
Share via:
BG

Posted Oct 10, 2019 at 04:27pm
Will miss the annual Christmas greeting and family update. Thoughts and prayers for the family. Rest in peace Uncle Elliott. The Bruce Groth family
Comment Share
Share via:
HS

Posted Oct 08, 2019 at 08:21pm
Wishing you peace to bring comfort, courage to face the days ahead and loving memories to forever hold in your hearts.

Flowers were purchased for the family of Elliott Groth. Send Flowers 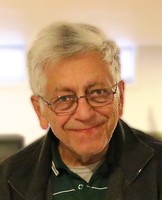