To share your memory on the wall of Francis Tenfel, sign in using one of the following options:

Provide comfort for the family of Francis Tenfel with a meaningful gesture of sympathy.

Frank was an avid golfer all his life. This was absolutely his second love after his family. He was not just avid, but a scratch golfer for several years with many accomplishments: 6-time WSGA Senior Amateur Champion, 1976 Runner Up WI State Open, 1975 WSGA Governor’s Cup Champion, 2-time Runner Up in WI State Senior Open Championship, 3-time qualifier USGA Senior Amateur to name just a few. He was also a member of Rivermoor Country Club in Waterford for over 30 years, West Bend Country Club and The Bog.
Frank had a unique sense of humor and was the cause of many humorous experiences through-out his life. He always acknowledged you on or off the golf course, gave many tips and advice to those who asked about their golf game and dedicated many hours to practicing with and without his daughter, Kelly. Frank loved life and there were many a times you would here him singing Tony Bennett’s, “I Left my Heart in San Francisco”. He was a man that was rough around the edges at times but had a warm, sensitive heart.

Frank is survived by his loving wife, Patricia, of 55 years. He was a wonderful father to Lynda (Lyle) Swarthout, Frank Tenfel and Kelly (Darryl) Zellmer; a proud grandpa of Terry Swarthout, Kyle, Carson and Kenlyn Zellmer; great grandpa of Olivia and Noah Swarthout. He is further survived by in-laws, William K. Fitzgerald and Judith Fitzgerald Miller; dedicated uncle to numerous nieces and nephews. .

A Memorial Service will be held at a later date.
Read Less

To send flowers to the family or plant a tree in memory of Francis Joseph "Frank" Tenfel, please visit our Heartfelt Sympathies Store.

Receive notifications about information and event scheduling for Francis

We encourage you to share your most beloved memories of Francis here, so that the family and other loved ones can always see it. You can upload cherished photographs, or share your favorite stories, and can even comment on those shared by others. 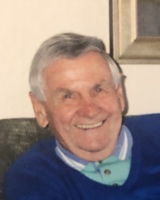