To share your memory on the wall of Gary Palmer, sign in using one of the following options:

Funeral Services for Gary will be held at 12:00pm on Monday September 28th at the Phillip Funeral Home Chapel (1420 W Paradise Dr West Bend). Visitation will be held at the funeral home on Monday from 10:00am until 11:45am. Burial will be at Buffalo Cemetery in Kewaskum.

The family would like to thank the rest of the family for all the support they gave, the neighbors, Ginny’s 3 BFF girlfriends.
Read Less

To send flowers to the family or plant a tree in memory of Gary Wayne Palmer, please visit our Heartfelt Sympathies Store.

Receive notifications about information and event scheduling for Gary

Flowers were purchased for the family of Gary Palmer. Send Flowers

Flowers were purchased for the family of Gary Palmer. Send Flowers 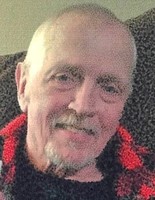