To share your memory on the wall of Gary Schneider, sign in using one of the following options:

After his dad was discharged from the army, Gary was raised in West Bend, Wisconsin along with his sister and brother. He graduated from West Bend High School in 1970 and then attended Milwaukee Area Technical College studying Land Surveying. On April 27, 1974 he married the love of his life, Ann C. Backhaus. Together they raised two sons, Jason and Matthew. Gary was passionate about the great outdoors–he enjoyed hunting of all kinds and taking his boat out fishing every chance he had. Gary also enjoyed traveling and playing cribbage with friends and family.

Gary is survived by his wife Ann, sons Jason (Kristina) and Matthew (Heidi), grandchildren Britton, Matalie, Brynley and Brielle Schneider and Carver Ullrich, parents Don and Garnet Schneider, brother and sister-in-laws: Harry and Jody Krueger, Lyn and Vonda Backhaus, Barry (Susan) Werner. He is further survived by nieces and nephews and many other relatives and friends.

He was preceded in death by his sister Linda Werner, brother Jeff Schneider, in-laws Howard and Jeanne Backhaus.

A Funeral Service will be at 12:00 pm on Saturday, December 19, 2020 at Phillip Funeral Home Chapel (1420 W. Paradise Dr., West Bend, WI 53095) with Pastor Randal Hughes officiating. Private interment will take place at Lutheran Memorial Cemetery. Visitation will be at the funeral home on Saturday, December 19 from 10:00am - 11:45 am. I lieu of flowers, memorials to the family are appreciated.

A special Thank You to the doctors and nurses of Froedtert Hospital - Milwaukee, 7th Floor CFAC, the staff and volunteers at Kathy’s House Hospice, and Rory Bolton the music therapist who serenaded Gary’s passing.
Read Less

To send flowers to the family or plant a tree in memory of Gary Donald Schneider, please visit our Heartfelt Sympathies Store.

Receive notifications about information and event scheduling for Gary

Love, The Apikelis Family, Erik, Tammy, Brody, and Brooklyn Kral, and other have sent flowers to the family of Gary Donald Schneider.
Show you care by sending flowers

Posted Dec 20, 2020 at 03:12pm
Dear Ann, I was so saddened for you and your family to read of Gary's passing. My sincere condolences. May our Lord and Savior wrap His loving arms around you and comfort you with your wonderful memories.
Take Care, Darla
Comment Share
Share via:
LF

Posted Dec 19, 2020 at 10:07am
With our deepest sympathy, we send hugs and prayers of comfort and peace today and for days to come.

Posted Dec 19, 2020 at 09:45am
Gary D. Schneider PLS; a Giant in the Surveying profession. A truely great boss and a excellent mentor, both professionally and personally!

Posted Dec 19, 2020 at 08:09am
Dear Ann and Family,
Our deepest sympathy to you for your loss. You are all in our thoughts and prayers.
Sincerely,
Joe and Chris Dehler
Comment Share
Share via:
JB

Posted Dec 18, 2020 at 11:07pm
Oh my heart aches... he was my first Christian boss. When I lived in Wisconsin I was a single mom with family hundreds of miles away. He was such a father figure to me. Oh Ann... my heart aches for you and your family. I am shocked. But so honored to have been in even the smallest part of his life. He inspired me in so many ways.
I will never forget his lessons, him screaming my name from his office, making the guys in the office take turns to heat up my car and scrap my windows because “that’s what a a gentleman should do”. I remember coloring his development drawings for his meetings. My favorite memory is when I switched the keys on his keyboard. He was so angry that the letter he pushed was not the correct one and called me over to come fix it. I remember having to tell him that had gotten pregnant (out of wedlock) and how scared I was because I knew he would be disappointed. But he made me aware that Christians sin, and we just need to ask for forgiveness, remember that a child is a blessing, and pick up ourselves an move on. I just wish he knew the impact he was in my life. So yeah, I am blessed to have known him for the 3 years that I did... and that was over 15 years ago.....still has his cell number saved in my phone. Wish I would have kept in touch. Ann, nit sure if you remember me, but you were always so kind to me, thank you for that. All my live to the entire family.
Comment Share
Share via: 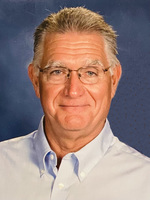 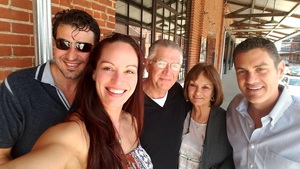