To share your memory on the wall of Gilbert Derler, sign in using one of the following options:

Born January 11, 1930, in Milwaukee, Wisconsin, to Albert P and Alphonsa (Stuckenhoff) Derler. He entered the gates of heaven on July 16th, 2020, surrounded by his loving family.

He is survived by h... Read More
Derler, Gilbert A. (Gil)

Born January 11, 1930, in Milwaukee, Wisconsin, to Albert P and Alphonsa (Stuckenhoff) Derler. He entered the gates of heaven on July 16th, 2020, surrounded by his loving family.

He is survived by his best friend and beloved wife, Lucille (Limbach) Derler. Next month they would have been married 66 years. His daughter, Ruth Holdener, sons, George (Janet) Derler and Paul Derler. His grandchildren, Dan (Jenny) Derler, Laura (Dave) Schneider, Alex Derler, Bryan Holdener and Matt Holdener, Step-grandchildren, Julia, Josip, John and Anthony. He had nine great grandchildren. He is also survived by many beloved, nieces and nephews. As the last of his generation, he was a father to many.

Preceded in death by his parents, his brothers, Robert and Henry, and his sister, Dorothy (Gonnering-Schwenke).
Gil attended Holy Angels grade school and graduated from Messmer High School in 1948. He proudly served in the United States Navy from 1948-1952, during the Korean War. He spent his whole career aboard a destroyer, the USS William M Wood DD715.

He worked and retired from the city of Milwaukee, in the Bureau of Engineers, as a Public Works inspector, for 37 years.

He volunteered many hours at the old Wood VA Hospital (currently Zablocki VA Hospital). When he was in Florida over the winters, he volunteered at one of the elementary schools helping the kids with reading and their homework. He was a blood donor and had donated over 12 gallons of blood in his lifetime.

Gil loved woodworking, making many things for family and friends, and to sell at craft shows. He loved playing Sheepshead, polka music, slot machines, and telling jokes. He never met a stranger. He engaged everyone he met, in conversation. He loved visiting with his children and grandchildren, telling them stories of his past life.

He did a lot of traveling with Lucille and went camping every weekend, for many years, with the family. He and Lucille spent the last 30 winters at Sugar Creek Country Club, in Bradenton, Florida, where they made many lifelong friends.

He was privileged to go on the Honor Flight, with his son George, in 2015. It was one of the best days of his life. The day ended with lots of family and friends meeting him at the airport on their return.

He thanks God, for the good life, that he enjoyed.

In lieu of flowers, donations can be made to Stars and Stripes Honor Flight Inc., PO Box 636, Port Washington, WI 53074, www.starsandstripeshonorflight.org.
Read Less

To send flowers to the family or plant a tree in memory of Gilbert A. "Gil" Derler, please visit our Heartfelt Sympathies Store.

Receive notifications about information and event scheduling for Gilbert

We encourage you to share your most beloved memories of Gilbert here, so that the family and other loved ones can always see it. You can upload cherished photographs, or share your favorite stories, and can even comment on those shared by others.

From Josip, Ginna, Kovan, & Kazmira Jaksic, Steven Jones, and other have sent flowers to the family of Gilbert A. "Gil" Derler.
Show you care by sending flowers

Posted Aug 09, 2020 at 02:53pm
sorry for your loss of a good dad and a good man. I'm from St Mary's and did not know him well but after seeing his picture, I realized it was a happy St Mary's face. May you be blessed with good memories and lots of f aith filled stories.

Posted Jul 23, 2020 at 06:04am
From: Michelle Cubanski (Henry Derler’s granddaughter) and Stephen Cubanski: We were sad to hear of Great Uncle Gil’s passing. I will always remember visiting his and Aunt Lucy’s house and swimming in the lake. His sense of humor and his practical jokes will not be forgotten. I loved receiving his homemade gifts which I still treasure. No one will forget his laugh which put a smile on everyone’s face. We miss you. Sending lots of love to Aunt Lucy.
Comment Share
Share via:
MJ

Posted Jul 22, 2020 at 07:14am
The Mico Jaksic Family sends their deepest sympathy to Gil’s family. We were fortunate to have spent time with him at family gatherings. He was a wonderful step-grandfather to our children. We will forever be greatful for that. He will be missed.
Comment Share
Share via:

Posted Jul 21, 2020 at 04:04pm
From Marlene Beardsley Cook - My brother John informed me of Gil's passing. Sending prayers and condolences to the Derler family. I have so many remembrances of growing up in the neighborhood on 69th St in Milwaukee and having such wonderful neighbors in the Derlers. Mr. Derler was so fun to be around. He loved kids. Everyone loved him. He created musical instruments out of saws and trash cans. He told funny stories. He laughed a lot. My parents stayed friends with the Derlers after they both ended up in Florida during retirement. I remember visiting in their Florida home years ago and having dinner with them. Always hospitable. He will be missed by many people I'm sure.
Comment Share
Share via:
FJ 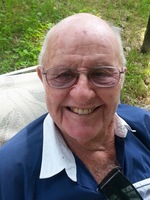