To share your memory on the wall of Grady Matthews, sign in using one of the following options:

Grady was a Radioman First Class for the U.S. Navy in World War II. He served 6 years in active duty, followed by 2 years in the Naval Reserves. He thoroughly enjoyed talking about navy ships and submarines with anyone who shared his interest.

Grady is a retiree of the Wisconsin Gas Company (now known as WE Energies), where he worked for many years servicing furnaces, eventually working his way up to a foreman position.

Grady is preceded in death by his dearly-missed wife of 61 years, Tina (nee D’acquisto) Matthews; his parents, his sister Helen Cantrell, his brother James Matthews, and his grandson Anthony Peterson.

A Funeral Service will be at 5:00PM on Tuesday, November 24, 2020 at the Phillip Funeral Home Chapel (1420 W Paradise Dr. West Bend, WI 53095) with Pastor John C. Bass presiding. Visitation will be Tuesday, November 24th at the funeral home from 4:00PM until 4:45PM. A Private Family Interment will be at Washington County Memorial Park.

A special thank you to the nurses and caregivers at Serenity and the Preceptor Hospice nurses who took such exceptional care of “The Sheriff” this past year.
Read Less

To send flowers to the family or plant a tree in memory of Grady Edward Matthews, please visit our Heartfelt Sympathies Store.

Receive notifications about information and event scheduling for Grady

We encourage you to share your most beloved memories of Grady here, so that the family and other loved ones can always see it. You can upload cherished photographs, or share your favorite stories, and can even comment on those shared by others.

Posted Nov 24, 2020 at 09:59am
Wishing you peace to bring comfort, courage to face the days ahead and loving memories to forever hold in your hearts.

Posted Nov 14, 2020 at 11:49am
I worked with Grady in physical therapy. He was a joy to get to know and always hard working. My sympathy for your loss. Enjoy sharing your memories.
Comment Share
Share via:

Posted Nov 13, 2020 at 11:00am
I remember many sleepovers with uncle Grady and aunt Tina and my cousins we always had a great time and also the Sunday spaghetti dinners what memories we have!
Comment Share
Share via:
HS

Posted Nov 13, 2020 at 09:57am
May your memories stay In your hearts forever! Love , Aunt Pat Debbie Jeff Kelly Jim Ann and Joseph

Posted Nov 13, 2020 at 08:46am
I just wanted to say Dad R.I.P. and tell mom I say HI. Nothing like being reunited with the one you love. You had a great life and a long marriage with mom. I wish we could all stay together forever but god had other plans.
Comment Share
Share via: 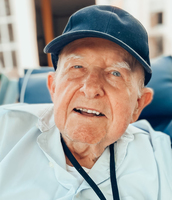