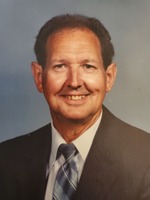 Henry M. Prom passed away Friday, February 4, 2022 at the age of 89. Henry was raised in Belgium, WI and attended St. Mary’s Catholic School. He served in the US Army in France during the Korean Conflict. Following discharge he was employed at Rice Pump and at Kiekaefer in Cedarburg. Following his marriage on April 28, 1956 (66 years), he and Carol lived in Port Washington until moving to rural Random Lake in 1960. In 1957, Henry was employed as a welder at the Gehl Co. until his retirement in 1994. He was a member of the Hexel Bank Club. He was also a member of Melvin Wester Belgium Post 412 of the American Legion. He enjoyed bowling with the Seniors of Random Lake, Campbellsport and West Bend. He was very proud of his 2 “300” games.

The family would like to thank West Bend Paramedics, Wonderful Wingate Cove Neighbors, Froedtert Physicians and staff, Chris Crom who faithfully brings Holy Communion and joy to us weekly, Horizon HealthCare and Hospice and Father Carlos for his care and compassion.