To share your memory on the wall of Ida Beduhn, sign in using one of the following options:

Provide comfort for the family of Ida Beduhn with a meaningful gesture of sympathy.

She was born on August 13, 1921 in Shawano, WI to Albert and Marie Koehler. Ida was raised in West Allis and graduated from Wes... Read More
Ida Mae Beduhn (nee Koehler), age 98, went to spend Christmas with her husband on Sunday, December 22, 2019.

She was born on August 13, 1921 in Shawano, WI to Albert and Marie Koehler. Ida was raised in West Allis and graduated from West Allis High School in 1939. On January 27, 1943, Ida married Glen a. Beduhn in Wichita Falls, Texas.

In 1957 they moved to the West Bend area. She was a clerk and tele-typist at Sears for over 20 years, retiring in 1982. After retirement, they moved to Montello and later to Beaver Dam where she was a volunteer Elder Peer Counselor for Dodge County.

In 2001, they returned to West Bend to be closer to family. Ida enjoyed reading, crochet, working crosswords, music, traveling, and spending time with her family. She was also a volunteer for Interfaith Caregivers.

Ida was preceded in death by her husband Glen, infant son Gary, and daughters-in-law Edna and Margaret.

A Memorial Service will be held at a later date. In lieu of flowers, memorials to the charity of your choice is appreciated.

Ida’s family would like to express their heartfelt appreciation to the staff at Cedar Community for the loving care they provided.
Read Less

We encourage you to share your most beloved memories of Ida here, so that the family and other loved ones can always see it. You can upload cherished photographs, or share your favorite stories, and can even comment on those shared by others. 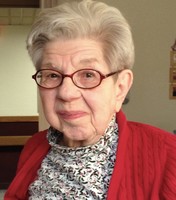