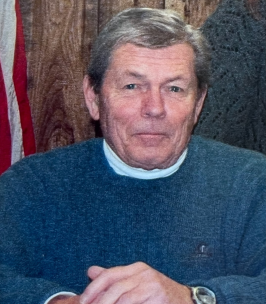 Jim and his family spent their summers on Silver Lake. He lived and stayed in that area for the rest of his life. This is where his love of boating began. As an adult, Jim’s favorite spot was on the boat at Lake Winnebago. When his family started, they cruised the waters there and Lake Michigan.

He met Adriana (Kruse) in Acapulco, Mexico while he was on vacation and they married in Chicago, June 11, 1976.

Jim graduated from Dominican High School and Spencerian College. He went on to work as a happy tool and die maker at A.O. Smith/ Tower while also holding positions at the Town of West Bend, where he was most conscientious of the well being of the town. His most recent position was the Chairman. His quick smile, willingness to help, plus his sincere interest made him well liked and respected. He worked hard to preserve the small town feeling.

Jim belonged to the Jackson Moonlighters Snowmobile Club and the Fond Du Lac Yacht Club. He and Adriana truly loved the water and camaraderie with their dockmates. Jim loved going fast…cars, boats, snowmobiles. He made amazing wooden model ships; which is our lasting memory.

Those left behind to love and cherish Jim’s memory are his wife of 46 years, Adriana; sons Cory (Jody) and Travis; grandchildren: Sierra, Ally, Diesel, and Malyna; sisters Judie ( Jim) Gruber and Mary Lou; and brother Jack (Maureen). Many nieces and nephews, friends, and furry members: Cubby, Hershey, and Lexi. When the family gathered, Jim would always say, “We did something right.”

Jim was preceded in death by his parents, in-laws Bill and Helen Kruse, brother Joseph, and precious granddaughter Anika.

His family appreciates the doctors, nurses, family, and friends who were here for him with a special thank you to Dr. Gary Herdrich. In Jim’s memory, whenever you wear a flannel or denim shirt, think of him.