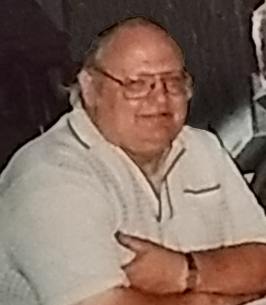 He was born on December 6, 1946 in Milwaukee to Carl and Marie (nee Bauer). Jim is survived by his brother Carl (Carol); nieces Yvette (Jake) Geissinger, Sarah (Ron); great nephews Christopher and Michael, and great niece Kala. He is preceded in death by his parents, uncles, aunts, and other relatives and friends.

Most days from the mid-1970s until 2001, Jim could be found stocking shelves or sitting behind the counter of Carl’s Choice Liquors on Main Street. After the close of the family business, he worked at Main Street Mobil station, baking up cookies and entertaining customers with his many stories. He was well read and loved archeology. He hated public recognition, so we can crow about him now!

Jim was a member of the Knights of Columbus, the Catholic Order of Foresters, and the Moose Lodge. He was an avid arts supporter, with tickets for many seasons with Sarah at the Schauer Arts Center. He loved movies, musicals, hi-fi stereo equipment, live performances, and Melody Top Theatre. As a former cornet and French horn player, he loved all types of music, especially Opera and Big Band. He also supported the new Museum of Wisconsin Art when they moved to their current location.

His big love, however, stemmed from his days as a lettered football player from Francis Jordan High School in Milwaukee. Jim was very much into sports, especially the Packers and Brewers, but enjoyed all sports.

He also was one of the founding directors of the West Bend Athletic Association, who took over the softball program for the city. He was a director with WBAA for 15-20 years, helping run the adult softball program for West Bend at Doc Gonring Park. He was very helpful in setting up the leagues and tournament brackets.

He was the score marker for Lighthouse Lanes softball team, who also traveled to many tournaments. This included a National Tournament in Roanoke Rapids, North Carolina. Jim marked score for the team at Barton Park on the Wednesday and Thursday leagues in Newburg. He also score marked for Carl's Choice softball team, the team sponsored by the family business. They won top West Bend honors, coming first in the league in 1997.

Jim was also a bowling enthusiast, especially at Lighthouse Lanes bowling alley in West Bend. He was competitive in high league averages. At one point in his bowling career, he was featured on the TV program “Bowling with the Champs.” His other TV claim to fame was taking part in a local Lottery TV show back in the 1990s.

In lieu of flowers, please donate to the Schauer Arts Center (or your favorite charity) in Jim’s name.

A special thank you to John & Joyce Heisdorf, John & Debbie Butschlick, Whitey & Linda Uelmen, and Butch & Rita Thomas, as well as the hospice team at the Aurora ICU.