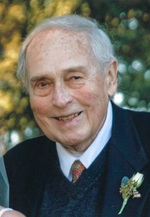 James "Jack" Martin Koehn age 90, passed away with his family by his side on January 8, 2022. He was born August 5, 1931 to Walter and Frances (nee Wanner) Koehn in Milwaukee, WI. His family later moved to West Bend where Jack graduated from West Bend High School in 1949.

Jack enlisted in the United States Air Force after graduation where he proudly served for four years. Due to his experience in watchmaking, he was assigned to work on the instrumentation of military aircraft, while also finding time to work his side gig fixing officers watches. He was stationed in various locations, but most notably Kwajalein in the Marshall Islands where he participated in Operation Ivy, the testing of the Atomic Bomb. He was honorably discharged in 1954.

Jack met the love of his life, Janet, while she was attending Mount Mary College, and he was home on leave from the Air Force. They were later married on September 8, 1956 at Holy Angels Church in West Bend. Jack worked with his father at what was then called Walter J. Koehn and Son Jewelers. He expanded the one shop operation to six stores and renamed it Koehn & Koehn Jewelers as part of the expansion. He would later sell five of the stores and retired in 1999 after selling the flagship store to his son Andy who continues to operate it today. (He often said the happiest memories of the jewelry store were his customers.) After retiring from the jewelry business, Jack earned his real estate brokers license so he could continue to interact with clients and friends throughout West Bend . Jack also served on the Board ofM&I Bank, was a proud member of the Loyal Order of the Moose, the Wisconsin State Jewelers Association, and many others.

Jack and Janet enjoyed traveling in their younger years, but ultimately Jack found comfort in being home around his family. A lover of cars and boats, he often bought and sold simply because he enjoyed the process. Jack loved Big Cedar Lake and always looked forward to a cocktail on a quiet deck with his Wife.

He was preceded in death by his loving wife Janet; parents, Walter and Frances; brother, Ronald Koehn, daughter-in-law Laura Wolf-Koehn, and other friends and relatives.

A private family gathering will be held to celebrate Jack's life on Monday, January 17, 2022. inurnment will follow at Washington County Memorial Park.

The family would like to extend a special thanks to the Cedar Community staff for their great care for Jack and acting as Family when we could not be present. Memorial contributions may be made in Jack's honor to Cedar Community Partners in Caring or Cedar Community Trail and Improvement Fund; each are c/o Sarah Malchow 113 Cedar Ridge Dr, West Bend, WI.