To share your memory on the wall of James Lentz, sign in using one of the following options:

As the eldest to three siblings (who all stepped up to the plate in challenging him), James developed quite the skillset as a leader, mentor, and friend.

Starting at an early age, James began to entertain others. After teaching himself how to play the keyboard, he rarely resisted the opportunity to play and arrange a sing-along.

After graduating at the age of sixteen from Our Lady of the Rosary School in Milwaukee in 1995, James took some time off from furthering his education. He later graduated from Bryant & Stratton College with a degree in Business Management.

In the winter of 1996, his mother came across an audition notice in the newspaper for the Milwaukee Players Production of Oliver! He was cast in the chorus and thus began his journey into the world of theater.
For several years, James wore many hats – some were for a costume, others for working behind the scenes. In 2001, he wore the hat as director for the first time for a children’s show, Greensleeves’ Magic with Village Playhouse of Wauwatosa Children’s Theater.

Over the next several years, James continued to direct shows for various community theater groups in Wisconsin. His first musical was Joseph and the Amazing Technicolor Dreamcoat in 2007 for the West Allis Players. Two years later, for the same theater group, he directed Disney’s Beauty and the Beast. In 2010, James reached the pinnacle of his directing career when he directed “Oliver” for the Patio Players. The quality of the show was such that its producer said they would never do the show again because this production could never be topped. This was a true testament to James’ skill as a director and visionary.

While many will remember James for his accomplishments in theater, his involvement in his Catholic Faith is the greatest contribution to his legacy. As the son of the choir director of Our Lady of the Rosary, James had a deep love for Gregorian Chant and other liturgical music. He spent many years studying music and Church History. As a result, he went on to arrange and even compose some liturgical hymns.

He also had a knack for teaching and used that skill to start a children’s magazine for the Catholic Youth known as The Cherub.

James was also a devoted member of the Third Order of St. Francis of Assisi for over twenty years.

He had a truly kind heart and quick wit and will be dearly missed by all who knew and loved him.

Donations for Masses for the repose of the Soul of James Lentz, Jr. should be mailed to Our Lady of the Rosary Roman Catholic Church, P.O. Box 206. Waubeka, WI, 53021.
Read Less

To send flowers to the family or plant a tree in memory of James Joseph "Br. Charles" Lentz Jr., please visit our Heartfelt Sympathies Store.

Receive notifications about information and event scheduling for James

Jess Lauren and Todd Herdt, The Jacobs and Wobick family, and other have sent flowers to the family of James Joseph "Br. Charles" Lentz Jr.
Show you care by sending flowers

Posted Feb 12, 2021 at 08:22pm
We are very sorry for your loss. Heaven has now gained an angel James will keep a watchful eye over all of those hearts he touched so deeply. May God Bless you and continue strength your family in this tough time. Our condolences 🙏 Tanya Beck, Sabrina Thompson, Ternay Beck, Bettina Beck.
Comment Share
Share via:
KS

Posted Feb 09, 2021 at 09:08pm
Wishing you peace to bring comfort, courage to face the days ahead and loving memories to forever hold in your hearts.

Posted Feb 08, 2021 at 06:40pm
My name is Tom Zeugner. I knew Jim when we did shows together with The Bay Players. I got to know the whole family. It was such a pleasure to work with Jim. He was always very lighthearted and jovial. I would like to express our deepest sympathies from all the Bay players that knew Jim. His theatrical presence will be missed on stage.
Comment Share
Share via:
TF

The Jacobs and Wobick family

The Jacobs and Wobick family purchased flowers for the family of James Lentz. Send Flowers 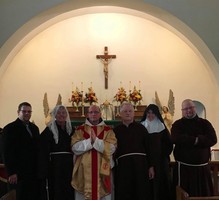