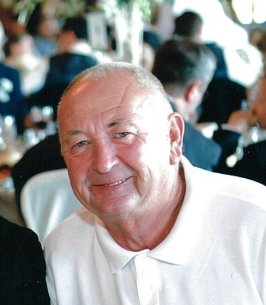 James “Jim” Wollner, 74, of West Bend returned to his Pa and Ma, unexpectedly on Saturday, June 18th, 2022 over Father’s Day weekend. Jim is a member of St. Augustine Church in the Town of Trenton.

Jim was born September 19th, 1947, in West Bend. West Bend is where he choose to carry out his life. He was blessed to be raised on a dairy farm in the Town of Trenton, with his parents and sister. Jim attended Holy Trinity “Newburg Tech” for grades first through eighth. After eighth grade graduation Jim attended West Bend High School where he graduated in June 1965.

Following his high school career Jim proudly entered the Army on July 6th 1967, where he served in Vietnam. He served in the 3rd Battalion 13th Artillery. Jim was honorable discharged on March 8th, 1969. Upon arrival home Jim returned to work for Vince Stockhausen Excavating. After all the digging was done Jim moved on to Dairyland Seed where he delivered supplies to all of our local farmers. The farmers were satisfied so Jim took his skills to Yahr’s On The Hill, making concrete building slabs. Jim decided it was time for family, he choose to move back to the family farm and fulfill his dream of being the farmer he always wanted to be. The bond between a father and son can never be broken, so he was proud to work next to his Pa. The farm just wasn’t busy enough for Jim, so he decided in 1987 to also tackle a part-time job at the Town of Trenton, growing into a full-time position, while also farming full-time. He always stated “I enjoy working for the Town, getting to know the residents of the Township”. In 2012 Jim decided retirement was in his future, he put his snowplow down one more time and retired.

Finally, retirement has come. Jim enjoyed retirement. Not only being a member of the Moose Hall, he enjoyed their Friday night fish fry’s. He enjoyed being outside working on the yard, riding his ranger with Chris around the farmland looking at the fish and visiting his “neighbors” and tinkering and fixing his “antique” equipment. Jim enjoyed working with his family on various projects including planting lawn, trees, pumpkins, popcorn and sweet corn (he was our skid steer driver), building houses and supervising while his boys’ fixed things and making sure the girls always had cool drinks in his cooler for everyone. The best part was when he returned to his recliner to turn on Paw Patrol with the great grandchildren. Jim was always willing to lend a helping hand to anyone that needed help. He was proud to have served his country in the Military. He was so proud to be chosen to do the honor flight in September of 2019 with his son Travis. On the return home of the honor flight his family was there to greet him and welcome him home.

His daughter, Tricia was always there lending a helping hand on the farm or checking on him in his “old age”. Jim enjoyed his monthly lunch dates with friends trying different restaurants.

Jim sure did love the get-togethers and parties (throwing lawn chairs in fires) with family and friends. He will be missed by all.

In lieu of flowers, memorials are appreciated to the Vietnam Veterans of America (vva.org).

The family would like to Thank Aurora Medical Center in Grafton for their great care during this time.