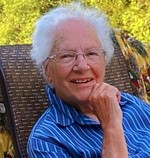 Janet Margaret Guyant, age 90, entered into eternal rest with her Savior on January 5, 2022.

Janet was preceded in death by her husband, John, as well as her mother and father, Hilda and Raymond Sr., siblings: Dorothy, Rosemary, Mary Louise, and Raymond Jr.

Janet worked at B.C. Ziegler and Company in the 70’s and then went on to co-own the Fashion Niche, a women’s clothing store in West Bend. She also worked for many years, at the West Bend General clinic in the medical resource center and as a switchboard operator before finally retiring at the age of 76.

Janet’s world revolved around spending time with her family and her very close circle of wonderful friends. She loved bird watching, golfing, painting, quilting, reading, and traveling. She also had a strong faith in God and found comfort in her bible studies and daily devotions.

Janet’s final wish was to have a sunny summer celebration for her family and friends to enjoy. Date yet to be determined.

In lieu of flowers, the family welcomes donations to Macular Degeneration Research, The Pancreatic Cancer Action Network, or a charity of your choice.