To share your memory on the wall of John Serdan, sign in using one of the following options:

He then met the love of his life, Gwendolyn Aileen Doehler and they married 08/26/1961. They moved to West Bend in 1966 and here they raised their family.

John was a successful salesman most of his working life, as he had a passion for getting to know people and helping them meet their needs. Him and Gwen opened Video Plus in 1984 and eventually owned 7 locations throughout Southeast WI. He was still working in the last days of his life for Penny Mustard in Menomonee Falls, WI. He had a very close relationship with the owners and his co-workers, as they were like a second family to him.

John was a caring, generous and wise father. He worked hard to give his children the best life possible. He loved his grandchildren deeply and was very often at their concerts, sporting events, and was also their chauffeur to and from school and practice. They shared a special relationship with him. He will be missed greatly.

He passed away peacefully, after a long battle with prostate cancer, at Kathy Hospice on
07/18/2019 surrounded by his loving family.

The family would like to thank Dr. Mooney and Staff at Kathy Hospice for the compassionate care he received.

To plant a memorial tree in honor of John Serdan, please visit our Heartfelt Sympathies Store.

Your Penny Mustard Family purchased flowers for the family of John Serdan.

Posted Jul 25, 2019 at 02:30pm
Hello Gwen, It's been years but I remember working with you at Sentry Foods just about the time you & John opened Video Plus in West Bend. I remember John explaining to me what this new thing a VHS tape was and what to do with it. It all seemed so strange to me. He eventually offered me a job working in that WB store. While I declined as I was pregnant with my first, John was always nice and friendly when I would run into him over the years. I am so sorry for your loss Gwen. John was a wonderful man. He will never be forgotten.
Cindy Balistreri
Comment Share
Share via:
GP

Posted Jul 24, 2019 at 02:15am
Kayla and I have met many lights in our life. John Serdan burned of a brilliance we may not see again for some time. Seven years ago we were both fortunate to have met John as a coworker and grow to know him as one of our closest and dearest friends.
We last visited John on July 16th, 2019. While with him, we chatted, laughed and laughed some more. Soon we all began plotting out how we would sneak a delicious and much deserved bottle of wine upon our next visit. (It was a pretty good plan. We may or may not have done that before.)
Our talk eventually turned serious for all of three minutes before I asked John for what we now call one of our greatest memories with one of our greatest friends. It was time for a picture.
After a “run-of-the-mill” photo we quickly collaborated for one more picture. The moment was captured and now resides on our wall of greats.
We are both so eternally grateful for that evening. John shared the thoughts, beauty, and blessings of being able to watch his family grow and bloom. John shared that while he was perfectly open to accepting where he stood in the moment it didn’t erase the fact that he had so much more he wanted to learn and experience. Then we all shared a brief moment of serious silence before John made a statement only a man of John’s profound life long experiences and huge heart could make.
“Life is a great many things. But the last thing it should ever be is a pity party.” JS
We love you John. See you soon great friend.
Greg and Kayla Perez 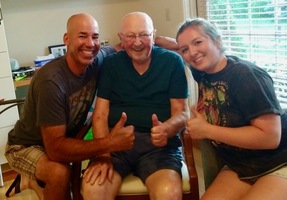 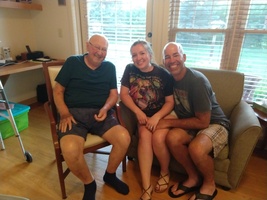 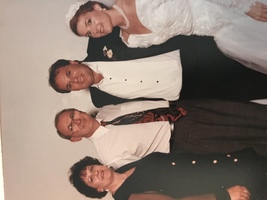