To share your memory on the wall of Lucille Geidel, sign in using one of the following options:

She married Merlin E. Geidel on September 28, 1946. Merlin passed away on October 4, 2014 six days after their 68th wedding anniversary.

Lucille worked at the Electric Company and White House Milk Company, was a stay at home Mom, and rejoined the workforce after her children were grown, retiring from B.C. Ziegler Company. For many years, she was a league bowler on Thursday nights, known to her children as “meatloaf nights”.

She had a strong faith and was a lifelong member of Holy Angels Church.

Thanks to Cedar Bay East and West staffs; Cindy O’Brien, PA, and Cedar Community Home Health and Hospice for their loving care. Memorials to Cedar Hospice or Holy Angels Church are appreciated.

To send flowers to the family or plant a tree in memory of Lucille Martha "Ceal" Geidel, please visit our Heartfelt Sympathies Store.

Receive notifications about information and event scheduling for Lucille

We encourage you to share your most beloved memories of Lucille here, so that the family and other loved ones can always see it. You can upload cherished photographs, or share your favorite stories, and can even comment on those shared by others.

Posted Sep 17, 2020 at 03:49pm
Patti and Mary and families,
We are so sorry for your loss. Your Mom and Dad were such good friends with my Grandma and Grandpa Milton and Lorraine Justman who have been gone for a long time already. The connections were many through work at the Electric Co. but also as card playing and fun loving friends. My parents, Chuck and Darlis Wilfer also send their condolences to the family....they would have been at a funeral had times been different allowing it. We did want you to know we were thinking of you and wish you all God's peace and love.
As much as you miss your Mom, just think how lucky you were to have your mother in your lives for so very long. She had a wonderful life journey.
Terri Wilfer Kramer and family
Comment Share
Share via: 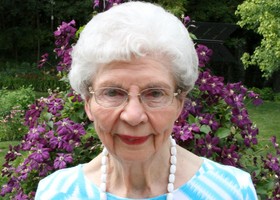