To share your memory on the wall of Luke Heppe, sign in using one of the following options:

On October 3, 1932, Luke was born to Arthur and Olive (nee Mueller) Heppe and grew up on the family dairy farm outside of J... Read More
Luke Paul Heppe, age 88, passed away peacefully on Friday, February 19, 2021, at Froedtert of West Bend Hospital.

On October 3, 1932, Luke was born to Arthur and Olive (nee Mueller) Heppe and grew up on the family dairy farm outside of Jackson, WI. He assumed the family farm business from his father and continued until his retirement in the late '90s. Luke married Agnes (nee Stashek) on July 2, 1960, in Millador, WI. He was an excellent agriculturalist, mechanic, and engineer and was always active on the farm. Luke enjoyed sporting events, riding his motorcycles, music and was a true car guy at heart. Luke was a lifelong member of St. Peter Parish in Slinger, WI, with his wife Agnes, who taught at the parish school for 39 years.

He is further survived by other relatives and friends.

In lieu of flowers, memorials are appreciated to St. Peter Parish, Slinger, WI.

A special thank you to Luke's caregivers from BrightStar Care and all the staff at Froedtert Hospital.
Read Less

To send flowers to the family or plant a tree in memory of Luke Paul Heppe, please visit our Heartfelt Sympathies Store.

Receive notifications about information and event scheduling for Luke

We encourage you to share your most beloved memories of Luke here, so that the family and other loved ones can always see it. You can upload cherished photographs, or share your favorite stories, and can even comment on those shared by others.

Posted Feb 25, 2021 at 01:12pm
Sheri, Jay, Lee (and your families): Your Dad was a wonderful man. He always struck me wise and strong...yet kindly and gentle...with a good sense of humor to boot! I have LOTS of great memories of him from spending time at your place when Jay and I were were kids. Even as we got older your Dad always greeted me kindly and enthusiastically whenever I happened to see him and I always enjoyed our conversations.
I understand his health had been in decline for a while, so I'm sure it's a blessing that he was finally able to pass away peacefully, but I also know--far too well--how difficult it can still be say goodbye to a beloved parent. As such, I just wanted to let you know that you are not alone in mourning your loss. My thoughts and prayers are with you all.
Comment Share
Share via:

Posted Feb 21, 2021 at 03:41pm
Our condolences and prayers to all of your families, Sheri, Jay, and Lee. Your dad was a grreat Brother in law to us, always enjoyed our visits with him. We had many good times and great meals that your mom prepared. He loved his farming and him and Ed could always find farm things to agree on.
Comment Share
Share via: 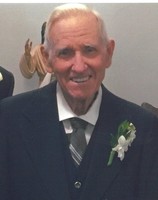