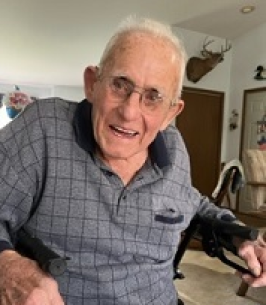 Lyle Herbert Mantz, passed away July 4th at the age of 89. He was born December 30, 1932 to Herbert and Hilda Mantz (Sponholz). Lyle graduated from Hartford High School in 1951. He married Janis Vinz on April 23, 1955. Lyle farmed a number of years and after he quit farming, he worked at Mercury Marine and then later was employed with Washington County Highway Department for 30 years. Lyle also worked part-time at Dico in Slinger. He also worked at Zivko’s, Slinger Speedway and Kettle Moraine Bowl. Lyle was an umpire for softball for USSSA in Richfield and Slinger. Lyle loved sports, especially baseball and football and in his younger days he played a lot of hardball and softball. Lyle loved fishing at his cottage up north and turkey and deer hunting with his sons up north. He enjoyed playing cards with family and friends and also liked playing in church dart ball leagues for a number of years. Lyle also served as president of the Hillside Manor Condominiums for 16 years. After he retired from the Highway Department, Lyle worked part time for Hilltop Asphalt.

Lyle is preceded in death by an infant son, his parents Herbert and Hilda Mantz, brothers Fred and Robert, sister Jo-Jo and grandson Andrew.

The Mantz family would like to extend a thank you for the compassionate care that Lyle received by Vitas and all their personnel.