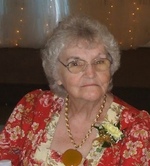 An unselfish, benevolent heart stopped beating on Friday, June 7th, 2019. Mavis Irene DuBrava (nee Bushnell) was surrounded by her loving family as she took her last earthly breath and was welcomed to the gates of Heaven.

Mavis was born on February 27, 1937, in Clark County, Wisconsin. She graduated from Owen High School in 1955 and enjoyed keeping in touch with classmates by attending most of the reunions. She met the love her life, Larry, while attending dances with her girlfriends. They were married on June 30, 1956, and would have celebrated 63 years of marriage this year. Together they raised three children. They began their married life while Larry was stationed in the Army in Fort Lewis, Washington. They lived in Loyal, Wisconsin, for about eight years before moving to the West Bend area which became the permanent homestead.

Mavis dabbled in different jobs until finding employment with the Department of Social Services in Washington County as a Homemaker in 1968. In 1979, she switched to a customer service job with the Brady Company in Milwaukee and retired in 1999. Both these jobs showcased her people/communication skills and willingness to go above and beyond.

Mavis was extremely eclectic in her interests. She was an avid reader and connoisseur of the news. Along with her husband, she worked at the polls in the Town of Trenton for the past 20 years. She considered herself a proud Democrat and valued the voting process. At various times, she enjoyed knitting, stained glass, cake decorating, ceramics, sewing, and quilting to name a few. She had a green thumb with houseplants. She loved rummage sales and finding a good bargain. She was a huge fan of cardinals even having a Christmas tree decorated with over 150 cardinal ornaments. She appreciated any kind of flowers especially if they were purple (her favorite color).

Mavis was a generous caretaker. She would do anything to help anyone in need if she could, even people she really didn’t know. She had a heart of gold in that respect. She made friends easily, and relished all the times she was able to spend with them.

Mavis enjoyed many travels with her husband to places like California, Arizona, Texas, Hawaii, the Bahamas, Australia & New Zealand. She went on several trips with her daughter to New York City, San Francisco, Toronto, and even took her to Hawaii for her 50th birthday. She had the pleasure of taking her granddaughter on her first trip to New York City. She loved going on what she called “getaways” with her husband. They would go to many different places around the state of Wisconsin for long weekends and just explore new areas with friends.

Mavis is survived by her devoted husband, Larry; her three children, Steve (Donna) of Milwaukee, Cheryl of Fond du Lac, Kevin (special friend Rosanne) of Fond du Lac; and her only granddaughter, Stephanie (aka Stella) of Milwaukee. She is further survived by her brother, Brian (Betty) Bushnell of Wausau, and sister, Priscilla (Marlynn) Laabs of Marshfield. Other relatives and countless friends will miss her kind, helpful spirit as will all her family.

A Memorial Service will take place on Thursday, June 13, at 3:00 pm at the Phillip Funeral Home Chapel (1420 W. Paradise Drive, West Bend, WI 53095). Mavis’ family will greet relatives and friends from 1:00 pm until the time of the service.

The family wishes to extend their gratitude to Froedtert Hospital doctors and nurses for their care but especially to Nurse Jaimie C. of NICU for his support to the family. Also. Thank you to Dr. Gary Herdrich and his amazing nurse, Jill, for the special care provided over the years.