To share your memory on the wall of Melvin Bohn, sign in using one of the following options:

Private Funeral Services will be held for the family

The family would like to thank the staff at Serenity Villa for their special and tender care of their Dad.
Read Less

To send flowers to the family or plant a tree in memory of Melvin L Bohn, please visit our Heartfelt Sympathies Store.

Receive notifications about information and event scheduling for Melvin

We encourage you to share your most beloved memories of Melvin here, so that the family and other loved ones can always see it. You can upload cherished photographs, or share your favorite stories, and can even comment on those shared by others.

Posted Dec 09, 2020 at 12:02am
We sure enjoyed playing cards with your father when we would go visit my mother Shirley Jung at Serenity Villa. Melvin, Judy , and my mom would play rummy for hours at a time. We would end up playing a few hands of rummy several times a week before the pandemic put a end to our visits. We sure missed our weekly hands of cards , but the great memories will live on! Melvin was truly a gentleman!
Comment Share
Share via: 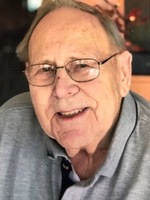