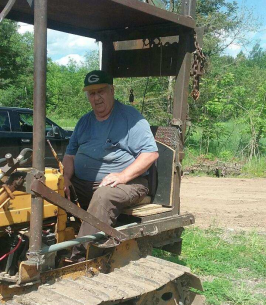 Mervyn “Merv” Michael Rafko, age 78, passed away on June 22, 2022 at The Pavilion in Slinger. He was born on December 27, 1943 in IL to Michael and Linda (nee Bartelt) Rafko. He was raised in Kennan, WI on a small farm where he learned from his dad how to hunt, fish and trap. Merv married his soul mate, Carol J. Kempen, on August 25th, 1962. They met when they were 11 years old planting trees at the Meadow Creek School Forest- where Carol told her friends “I am going to marry that cutie some day”. After graduating high school, they moved to Milwaukee, and he became a Mason. They were blessed with 4 children and moved to Hubertus in 1970. Merv was a great marksman and very proud of it. He passed on all his skills to his children and grandchildren. Merv spent endless hours in his garage making things to help people. He stood up for what he believed in no matter what and held his ground for the truth. He was always quick with a joke or a comeback. Merv loved spending time with his family.

Merv is preceded in death by his parents, his parents-in-law Louis (Margaret) Kempen, his siblings-in-law, Diane (Larry) Peroutka, Annie Kruppe and Denise Kempen.

A special thank you to the Pavilion staff, especially Kerry and Ali for the loving care provided.