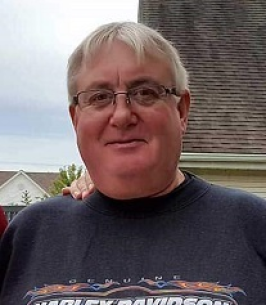 Passed peacefully on June 12, 2022, at the age of 63. Born in Hartford, WI, the son of Robert and Patricia Freitag. Mike was raised in Slinger, WI, He was a 1977 graduate of Slinger High School. Mike worked for Midas International Stamping for 21 years, and Froedtert Health & MCW for 11 years.

Many would remember Mike as joyful, relaxed, and kind-hearted. Family and friends were the centers of his being. Mike was thoughtful about spreading his time between his grandchildren, whether going to sporting events or weekends up north at his cabin. Mike had many passions in life and put a lot of thought and love into planning his adventures. He always invited his friends and family to share his favorite things to do. Mike spent countless hours ice fishing on Big Cedar Lake. Ice fishing is a hobby that is long standing even though he never quite found the hot spot. Another favorite time of the year was deer hunting season. He would always get up early on opening day to strategically pack his backpack full of food. He was a man of tradition, with a thermos full of soup, sandwiches, candy galore, and a thermos with milk to wash it all down. We believe his extra care allowed him to avoid multiple trips back to the cabin and gave him some spare napping time. Racing was another hobby infused into the life he lived. He raced in the Amateur and Figured 8 division at Slinger Speedway for seven years. He faithfully watched NASCAR on Sundays, cheering for his favorite NASCAR drivers, the most current being Chase Elliott. He spent countless years heading to Brooklyn, Michigan, with “Little” Mike, Betty, and others for a long weekend of racing, campfires, a few Miller-High Life beers, much laughter, and music. Mike is now reunited with his friends and family in heaven, watching over us all.

A Remembrance of Life will be held on Saturday, July 16, from 1:00PM until 5:00PM at Mueller’s Linden Inn, 4919 State Hwy 144, Hartford, WI 53027. The family asks that no flowers be sent, but instead if you wish to purchase Apple Trees for Mikes Up north Land would be appreciated.

The family would like to Thank, Froedtert West Bend Hospital staff, the MD’s, RT’s and other support staff. Lifestar Emergency Responders, and Slinger Fire Department. Froedtert Milwaukee NICU nurses Ashley, Hannah, Breanna, Sarah, and Hanna for the care they gave to Mike.

“There is only one happiness in this life, to love and be loved” ~ George Sand