To share your memory on the wall of Patricia Rosenthal, sign in using one of the following options:

Provide comfort for the family of Patricia Rosenthal with a meaningful gesture of sympathy.

Patricia was born on March 14, 1932 in Westby, WI to Olaf and Ida (nee Solberg) Melby. Graduated from Cedarburg High School class of 1950. She married the late Ralph Rosenthal on April 19, 1952 and lived in California. The couple moved to Cedarburg where they started their family and later moved Jackson and eventually moving to Random Lake. Moving to Random Lake allowed Patricia to have the animals she loved. She had a passion for sewing and was a master seamstress and enjoyed making clothing for herself and for Ralph and their family. They also liked to ride motorcycles. After retirement, Patricia and Ralph moved to Fond du lac.

A Funeral Service will be at 12:00 pm on July 3, 2019 at the Phillip Funeral Home Chapel of West Bend with Pastor Paul Mittermaier presiding. Interment will take place at Christ Lutheran Cemetery in Jackson. Visitation will be at the funeral home on Wednesday, July 3 from 10:00 am until the time of service (12:00 pm).

We encourage you to share your most beloved memories of Patricia here, so that the family and other loved ones can always see it. You can upload cherished photographs, or share your favorite stories, and can even comment on those shared by others.

Posted Jul 02, 2019 at 12:20pm
My deepest sympathy to the Rosenthal family. She was a kind and wonderful mother.

Flowers were purchased for the family of Patricia Rosenthal. Send Flowers

Posted Jul 01, 2019 at 06:08pm
Our condolences to Pat's family. I , Roger, graduated from CHS in 1950 and my wife Joan, graduated in 1951 so we both knew Pat and Bob in our school years. We have fond memories of a wonderful brother and sister. May they both rest in peace.
Fondly,,
Roger and Joan (Baumann) Butt, Kirksville, MO

Posted Jun 30, 2019 at 08:42pm
With our deepest sympathies. The Stollberg's, The Christofferson's, The Haunfelder's, The Russell's, The Lukas', The Ludin's

Flowers were purchased for the family of Patricia Rosenthal. Send Flowers 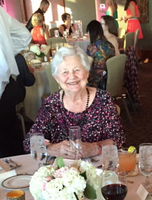