To share your memory on the wall of Ramona Schulteis, sign in using one of the following options:

Print
Ramona B Schulteis (nee Schneider), 90, passed away on November 7, 2019, at the Pavilion at Glacier Valley. Ramona was born in West Bend on January 13, 1929, to the late John and Josephine Schneider.

Ramona is survived by her 12 childre... Read More
Ramona B Schulteis (nee Schneider), 90, passed away on November 7, 2019, at the Pavilion at Glacier Valley. Ramona was born in West Bend on January 13, 1929, to the late John and Josephine Schneider.

She is further survived by 29 grandchildren, 28 great grandchildren, by her sisters, Dolores Johnson and Pauline Schoenecker, sister in law Frances (nee Moser) Schneider, and numerous nieces and nephews.

To send flowers to the family or plant a tree in memory of Ramona B. "Mona" Schulteis (Schneider), please visit our Heartfelt Sympathies Store.

Receive notifications about information and event scheduling for Ramona

We encourage you to share your most beloved memories of Ramona here, so that the family and other loved ones can always see it. You can upload cherished photographs, or share your favorite stories, and can even comment on those shared by others.

Greg and Kathy Klink sent flowers to the family of Ramona B. "Mona" Schulteis (Schneider).
Show you care by sending flowers 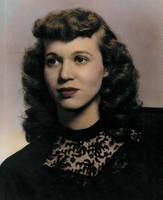