To share your memory on the wall of Refugio Coronado, sign in using one of the following options:

Print
He was a proud and dedicated brother, husband, father and grandfather. Always willing to help anyone in need.

Born in Cotulla, Texas on July 4th, 1941 to Dionicio & Alcaria (nee Velasquez) Coronado. He attended school in Cotulla and ... Read More
He was a proud and dedicated brother, husband, father and grandfather. Always willing to help anyone in need.

Born in Cotulla, Texas on July 4th, 1941 to Dionicio & Alcaria (nee Velasquez) Coronado. He attended school in Cotulla and started working at an early age which helped him develop an exceptional work ethic and many skills. He started doing seasonal work as a young adult at the Krier Nursery & Sod Co. and Krier Canning Co traveling back to Texas back in the winter.

On March 8th 1964, he married the love of his life Sylvia Cabello and they decided to live happily ever after in Wisconsin. While in Wisconsin he worked with the Krier family for many years and eventually started working at the West Bend Company in 1972. His main job at the West Bend Company was a master buffer. He learned from the best and was a quick study, this enabled him to master his craft. Along with this, he took on many other tasks such as welding, assembly, punch press and trimmer. Always ready to take on any challenge. After working 30 years for the West Bend company they were acquired by Regal Ware where he stayed on for an additional 5 years before retiring in 2007.

His hobbies included fishing, hunting, bird watching and being a handyman. He also loved spending time with his family and friends. He was a member of the West Bend Company 25 year club.

Preceded in death by his parents Dionicio and Alcaria Coronado, along with his brothers Jose, Robert, Pablo and Guadalupe Coronado, one sister Martina Coronado, In-laws Librado Cabello, Sr. and Maria (nee Rios ) Cabello, brother-in-law Feliberto Zertuche Sr., and sister-in-law Modesta Cabello, and his toy poodle Cinnamon who he called the baby of the family.

The family would like to thank the nurses and staff at Froedtert Hospital, The Pavilion at Glacier Valley for his care.

When a believer dies, they will have no more pain and sorrow, only joy in Heaven. The pain and sorrow comes to the loved ones who are left behind. As they remember the memories of the past, all the love they have shared with the one who has been called home.

Funeral Services for Refugio will be held at 6:00pm on Friday, July 10th at the Phillip Funeral Home Chapel (1420 W Paradise Dr. West Bend) with Fr. Carlos Londono presiding. Visitation will be held on Friday from 4:00pm until 5:45pm. Interment will be at Washington County Memorial Park.
Read Less

To send flowers to the family or plant a tree in memory of Refugio V "Rufus" Coronado, please visit our Heartfelt Sympathies Store.

Receive notifications about information and event scheduling for Refugio

We encourage you to share your most beloved memories of Refugio here, so that the family and other loved ones can always see it. You can upload cherished photographs, or share your favorite stories, and can even comment on those shared by others.

Flowers were purchased for the family of Refugio Coronado. Send Flowers

Posted Jul 09, 2020 at 02:38pm
Our most sincere condolences.You all are in our thoughts and prayers.Francis Carbajal Cotulla TX

Posted Jul 08, 2020 at 07:53pm
Although I only met Rufus (Sr.) one time (many, many years ago), he made a lasting impression. What a wonderful, funny and hard-working man he was. Along with his wife, he raised three of the nicest people I have ever met. They all turned out as great as he was. His legacy will live on through them. Please accept my condolences and know that my heart is with your entire family as you grieve the loss of a great husband, father, grandfather & friend.
Comment Share
Share via:
RF

Russ and Cindy Horning and Family

Posted Jul 08, 2020 at 02:05pm
We are so sorry to hear of the passing of your loved one Rufus. Please accept our deepest Sympathy, our thoughts and prayers are with all of your family during these days of grief. Worked at west bend co. with Rufus for many years, great hard worker, and just an all around good person. May Rufus Rest In Peace.
Comment Share
Share via: 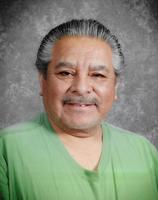