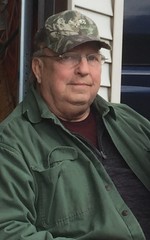 Richard “Dick” Raymond Jeranek Sr., age 80, passed away on Wednesday, February 9, 2022 at his home in Lakewood, WI. He was born on March 30, 1941 in Richfield, WI to Raymond and Martha (nee Johnson) Jeranek. He graduated from Hartford Union High School and married his love, Mary McKay on February 24, 1968. Dick enjoyed hunting and riding his scooter.

A special thank you to Unity Hospice, the Lakewood/Townsend EMT and the Nicolet Pharmacy.