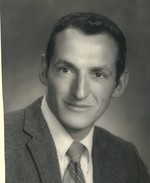 Richard “Dick” Henry Mayer, age 84 of Slinger, slipped away to be with his Lord in the early hours of Thursday, May 30th. He was born on January 13th, 1935 in the Town of Polk to Christ A. and Helen (nee Mauer) Mayer. After graduating from Slinger High School in 1953, he farmed with his father and brothers Bob and Fritz. Mayer Farms was well known for developing outstanding Holstein genetics. After the Mayer Farms Dispersal in 1965, Dick and Fritz continued the Mayer Farm legacy. Dick was a true cow man. He judged numerous county and state Holstein shows, and also served on numerous All American Selection Committees. He was united in marriage to his best girl Marilyn Wolf on September 24th, 1959, at St. Paul’s Ev. Lutheran Church in Slinger. He was an active life long member of Faith UCC in Slinger. He was active in the County, State, and National Holstein Association, and served on the Washington County Holstein Board for many years, where he started the County Junior Holstein Association. He also served on the Wisconsin Holstein Board for twelve years. As a young man, he was active in his local 4-H club, and became a 4-H leader for over 50 years, touching the lives of hundreds of young people. Dick was proud to see the Mayer Farm legacy continue with his family.

Funeral Services for Dick will be held at 4:00PM on Sunday June 2nd at Faith UCC Church (2895 Slinger Rd. Slinger) with Rev. Sharon Stier presiding. Visitation will be held on Sunday at the church from 12:30PM until time of service. Interment will be at Faith UCC Cemetery.