To share your memory on the wall of Robert Brandt, sign in using one of the following options:

Preceded in death by his parents Erwin and Lillian (nee Bengtson) Brandt and two grandsons.

Born in Wauwatosa Wisconsin on February 5, 1928. Graduated from Wauwatosa High School 1946 and from Marquette University in 1951 with a Bachelor of Science Degree in Business Administration after serving his country in the Army of Occupation in Japan 1946-47. After a long courtship and a two-year engagement, he married Audrey on August 19, 1950 and they remained best friends for over 70 years. The greatly enjoyed being with their beloved children and watching them grow. Bob was very proud of his 13 grandchildren and 19 great grandchildren. They enjoyed an active social life with friends.

After graduation he was employed as a Salesman for Swift & Co, in their Milwaukee grocery division. Two years later he changed employment to Broan Mfg. Co., Inc. in the office. When the company moved to Hartford in 1956, Bob and Audrey moved with them. Bob introduced a Computer System while employed at Broan in the 1960, which gave him skills he used in retirement keeping various kinds of records on his personal computer including years on Ancestry. After 38 years of service with Broan he retired June 1, 1981.

White living in Hartford Bob served on the Council of Redeemer Lutheran /Church and treasurer. He represented Broan on the Hartford Chamber of Commerce where he was president in 1965, He was Past President of Hartford Rotary Club and a Paul Harris Fellow. He served on the Hartford Memorial Hospital Board of Directors for six years and was Chairman 1986-87. He was active with the Boy Scouts while his sons were growing, He was a member of the Office Manager Association, the Data Processing Managers Association and Kettle Moraine IBM user group.

He was a member of Hartford Lodge No. 120 F. & A.M., Kilbourn Chapter No. 1, Wisconsin Commandery No. 1 and Valley Milwaukee Scottish Rite.

During his retirement he also enjoyed fishing and swimming at their Duck Lake home near Elcho, Wisconsin. They enjoyed their trip to Europe and cruises to the Caribbean and Alaska. They also enjoyed 18 years at Fountain of the Sun in Arizona during the winter.

After he and Audrey moved to Cedar Ridge in West Bend, Bob enjoyed reading humorous jokes at the Mens Coffee on Friday mornings and swimming daily in the large pool.

In lieu of flowers memorials to Shriners Hospital for Children or Cedar Community Foundation.
Read Less

To send flowers to the family or plant a tree in memory of Robert L. "Bob" Brandt, please visit our Heartfelt Sympathies Store.

Posted Jan 29, 2021 at 09:46pm
Our hearts are with the Brandt family in this difficult time. Grandpa Brandt is a legend at Knights Templar Club.

Posted Jan 23, 2021 at 09:28am
Wishing you peace to bring comfort, courage to face the days ahead and loving memories to forever hold in your hearts. With deepest sympathy.

Posted Jan 20, 2021 at 11:02am
To all the brandt family, I can so honestly and happily say that Bob was one of the most sincere and friendly members of the knights Templar club. He was a good Mason, friend and I will enjoy my many memories of him ♥️
Comment Share
Share via:
EF

Posted Jan 20, 2021 at 12:25am
In loving memory of Grandpa Brandt. We send you thoughts of peace and courage from across the sea. All our love x

Posted Jan 19, 2021 at 02:16pm
My prayers are with the Brandt family. Bob lived a very long and productive life. Barbara Bates Lindert
Comment Share
Share via: 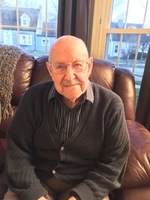