To share your memory on the wall of Robert Sauer, sign in using one of the following options:

Bob was born on December 7th, 1942, in West Bend, the son of the late Arnold and Imelda (nee Zimmel) Sauer. On May 18th, 1968, he married Barbara Espen at St. Frances Cabrini Church in West Bend, WI. Bob and Barb continued to reside in West Bend throughout their marriage.

Bob grew up in West Bend. His younger years were spent playing sports and being with friends. He often referred to himself as “the jack of all trades, master of none.” Bob worked at Plout’s Sentry Foods Store in West Bend for 23 years. He much enjoyed interacting with customers, finding them the perfect produce and bagging their groceries with care. He later went on to work at Serigraph Sales and finally retired from Level Valley Dairy to pursue the good life. Bob had a lifetime of fishing experiences he enjoyed and loved to share. Three-handed Sheepshead was a loved card game he learned from his Grandpa Sauer. Bob also enjoyed playing tennis with his friends and family, which later led to pickleball. Bob took great pride in his organized garage and precision cut lawn. He enjoyed time spent with his grandchildren and especially cherished holiday traditions such as the gin card game tournament and ping pong tournament. He was an avid sports fan and enjoyed supporting many local and state teams. Bob was a past member of St. Frances Cabrini Church as well as Holy Angels Church. Recently, he attended Cedar Springs Church in Slinger, WI.

He was known for his light-hearted humor and friendly spirit, always making people feel welcome.

In addition to his parents, Bob was preceded in death by his in-laws Inky (Luella) Espen, Brother-in-law Bob Puerling and nephew Jeff Puerling.

A drive through visitation will be held at Phillip Funeral Home on Monday, November 9th from 1-3PM. Bob’s family will be outdoors under the canopy where friends will safely drive through to celebrate and honor Bob’s journey. Pastor John Bass will be officiating a Private Family Service.

In lieu of flowers, the family requests donations to St. Jude’s Children’s Hospital or memorials of your choice. The family would like to extend a special thank you to Dr. Gary Herdrich and his nurse, Jill, for their unwavering support and caretaking.
Read Less

To send flowers to the family or plant a tree in memory of Robert Roman Sauer, please visit our Heartfelt Sympathies Store.

Posted Nov 07, 2020 at 03:08pm
So sorry to hear of Bob's passing. Please accept my heartfelt sympathy. May the wind always be from the west and the fish always biting. Till we meet again. Your friend and classmate. Jerry Wolf.
Comment Share
Share via:
JG

My condolences to Barb and the family. Bob and I were class mates and occasionally played tennis. I could never beat him even though his serve never seemed to bounce when it landed in my court. 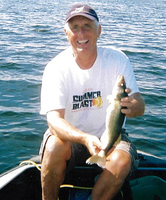