To share your memory on the wall of Roland Moericke, sign in using one of the following options:

Provide comfort for the family of Roland Moericke with a meaningful gesture of sympathy.

Roland H. Moericke of West Bend WI, surrounded by his loving family lost his last battle on October 23 2019. His frail body could no longer fight as hard as his mind.

He was born to this world on Aug 27th... Read More
A Warriors Tribute:

Roland H. Moericke of West Bend WI, surrounded by his loving family lost his last battle on October 23 2019. His frail body could no longer fight as hard as his mind.

He was born to this world on Aug 27th 1927 the son of Gerhardt Moericke and Hattie (Lueke) Moericke-Jasman.

Enlisting during WWII he was reborn as a United States Marine in October 1945. He served in China, and Alaska, and was then again called to active duty during the Korean Conflict. He continued serving his community and PROUDLY wore the title United States Marine until his last breath.

After leaving active duty for the 2nd time he moved from Beaver Dam to Butler WI where he and his brother Doug started a couple small businesses including: Butler Glass and Radiator, a small magazine /newspaper delivery service, and a beanbag target board printing company. Once he moved back to West Bend he served on several different community and State boards, and was a member of the West Bend Fire Dept. He worked at Slesar Glass in downtown West Bend for decades. A job which kept him always tied to the community. He was always proud of the work he did and the homes he helped build. He then moved on to The Paint Shop in Hartford where he continued doing glass work until “retiring”. He did all this while raising 7 children pretty much on his own, and helping many more.

He was a vital member of several local and state organizations, including The American Legion (and Camp American Legion in Lake Tomahawk), The 40 & 8, Veterans of Foreign Wars (VFW), The Korean War Veterans Association, and most recently and possibly the one he took the most pride in as he was a plank owner in the formation of The Kettle Moraine Detachment, Marine Corps League Det #1203.

He had a true love for the Marine Corps, and raised 3 sons, 1 stepson, and 2 grandsons, who all went on to serve the Marine Corps. He also touched the lives of many others that would also serve our Country.

His love for Country was only topped by his love for his family. And he dearly missed his sons Mark and Randy.

He loved going up to the family cabin in Lake Tomahawk where you were never all too sure where fact ended and fiction began, but the stories were always good.

Deer hunting was always a “holy grail” moment for him, and no matter what the doctors would say in recent years you could count on seeing him up in his tree stand sun up until sun down. Even though you would swear he could not see you standing in front of him at times, he would always manage to hit the bullseye on the target when sighting in his rifle. Once a Marine rifleman, always a Marine rifleman.

Rollie was preceded in death by his long time love Bobbie Erickson, his sons Mark and Randall, his brothers and sisters Douglas, Clarence, Evelyn, and Helen and Elmer.

While we feel the loss and grieve for Rollie, we also feel the pride and love we shared with him and know he is with Mark, and Randy and having a “flu shot” with Butch at the bar in Valhalla and know Bobbie is whispering in his ear to get out of there. So, until we are all together again, Semper Fi Marine! Rest easy. We have the watch.

We encourage you to share your most beloved memories of Roland here, so that the family and other loved ones can always see it. You can upload cherished photographs, or share your favorite stories, and can even comment on those shared by others.

Jim,Penny,Dawn,Kim,Ben,Brittnay,Michelle,Odin sent flowers to the family of Roland Harold Moericke.
Show you care by sending flowers 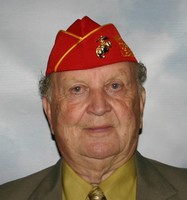