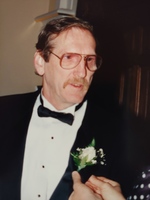 Ronald F. Kriefall, age 81, passed away Tuesday August 20, 2019 at Kathy Hospice.He was born on November 12, 1937 in Milwaukee to Walter W. and Evelyn T. (nee Wolf). He attended Custer High School and Boys Tech in Milwaukee. Ron was a former member of the Army National Guard and a member of the West Bend Moose Lodge #1398. Ron’s interests were working on cars, being a Handyman/Jack of all trades, mechanic, loved Polka music, was a collector, loved parties, but he especially loved spending time with his family. On June 18, 1960, Ron was united in marriage to Dolores (nee Will) at Mother of Perpetual Help Catholic Church in Milwaukee.

Visitation for Ron will be held on Sunday August 25th from 1:00 until 4:00pm at the Phillip Funeral Home Chapel (1420 W. Paradise Dr. West Bend, WI 53095). Additional visitation will be on Monday August 26th at the funeral home from 10:00am until 10:45am with Funeral Services at 11:00am with Fr. Howard Haase presiding. Interment will take place at Washington County Memorial Park.