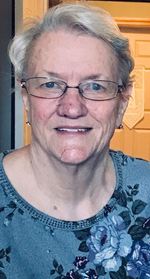 Sherry Athey of West Bend passed away peacefully on March 19, 2022. She joined her forever 11-year-old son Jason in Heaven and was deeply loved to her last breath. In January, 2016, she was diagnosed with Alzheimer’s. She relied on her strong faith in God, devoted family and friends to guide her through this difficult journey.

On June 30, 1962, she was united in marriage to Arthur Feron. Art and Sherry raised two sons, Taric and Jason and an adopted daughter, Kirsten. Art and Sherry provided foster care to 17 children and two single mothers and their newborn babies.

Sherry was active in the church choir and served as a Sunday school teacher. She also volunteered with the Special Olympics and was a camp counselor for children and adults with special needs.

On July 24, 1999, she was united in marriage to Norbert Athey. They enjoyed riding their three and four wheeled bikes on the trails in Green Bay.

Sherry’s family will hold a private celebration of her life.

Special thanks to Heartland Hospice and New Perspective Senior Living for your kindness and compassion.