To share your memory on the wall of Thomas Driggett, sign in using one of the following options:

He is preceded in death by his parents, George and Eda Driggett; his siblings, George and Barbara; and his wife, Beverly.

A memorial service will be held for Thomas at a later date.

Memorials are appreciated to the American Heart Association, and the Alzheimers Association at www.alz.org
Read Less

To send flowers to the family or plant a tree in memory of Thomas Robert "TR" Driggett, please visit our Heartfelt Sympathies Store.

Posted Jul 10, 2020 at 11:22am
I’ve known Tom for many years and we shared many great conversations about business and family while I cut his hair. He will be missed. May he Rest In Peace. My Deepest sympathies to his family during this difficult time.

Posted Jul 07, 2020 at 03:05pm
We are incredibly sorry for your loss Lori. Our thoughts and prayers are with you and your family at this time. Love, Heather and Jennifer

Posted Jul 07, 2020 at 12:39pm
Even though I drove for Riteway in Milton, I was on several bus trips with Tom. He was always friendly and helpful.
Comment Share
Share via: 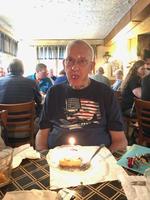