To share your memory on the wall of Thomas Roskos, sign in using one of the following options:

Tom passed away peacefully on December 26, 2020, with family by his side at the age of 92. Tom was born to John and Elizabeth (Hnida) Roskos in Mercer County, Pennsylvania, the town of Farrell in the apartment above t... Read More
Dr. Thomas Roskos

Tom passed away peacefully on December 26, 2020, with family by his side at the age of 92. Tom was born to John and Elizabeth (Hnida) Roskos in Mercer County, Pennsylvania, the town of Farrell in the apartment above the Hnida Market on Emmerson Avenue, along with his 4 brothers: Orean, Robert, Norman (Tom’s twin), John and a sister who died before birth. He attended Thiel College in Pennsylvania and later became a Doctor of Osteopathic Medicine from Kansas City College in Missouri, followed by a residency in radiology at Mount Clemens Hospital in Michigan. Tom practiced radiology in the Milwaukee area at both Northwest General Hospital and New Berlin Memorial Hospital. Tom was a pioneer in his field of radiology, having the first privately owned CT scanner and MRI in the United States. Husband to Judith A. Moriarty and dearly loved father to his three children Judith, Sharon, and Thomas Michael. Much loved grandfather to Autumn Rose, Thomas III, and Lauren Michael. He will live on in the hearts of those he left behind and his larger than life legacy will be cherished by future generations.

To send flowers to the family or plant a tree in memory of Thomas Roskos, please visit our Heartfelt Sympathies Store. 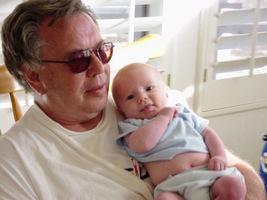