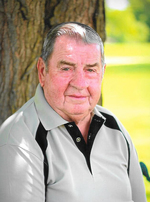 Wayne E. Bublitz, age 88, found eternal peace on Thursday, December 19, 2019. He was born on June 30, 1931 to Alex and Irene (nee Tews) Bublitz. He married Nancy (nee Kent), who preceded him in death in 1987. He then married Alice (nee Moody), who also preceded him in death in 2002. In his earlier years, he enjoyed trap shooting and hunting trips out west with friends. Wayne retired from Wisconsin Drywall. After retirement, he enjoyed raising pumpkins with his brother, “Puddy” and driving around in their golf carts.

He is preceded in death by his parents.