To share your memory on the wall of Wayne Gessner, sign in using one of the following options:

Provide comfort for the family of Wayne Gessner with a meaningful gesture of sympathy.

He settled in the Richfield area and became very involved with his many interests. He became a square dance caller, along with being a wonderful dancer. He held offices in various clubs that he belonged to. Some of them were the Creation Science Society and the Wisconsin Train Organization. He spoke at the County and State Fairs about God’s creation of the world and how we should respect and understand how to be more careful around trains and how to operate. He also attended classes at the Berean Bible Institute in Slinger to learn more about God’s word on a daily living basis. He loved feeding a multitude of various birds in his backyard and was diligent in taking care of them, as he watched them from his kitchen window. He also attended Kettle Moraine Bible Church in West Bend, as well as the West Allis Bible Church. His friend and pastor Les Takkinen will be conducting the funeral service for Wayne.

The family would like to thank The Kathy Hospice in Jackson for their wonderful care of Wayne they provided during his stay.
Read Less

To send flowers to the family or plant a tree in memory of Wayne A. "Pickles" Gessner, please visit our Heartfelt Sympathies Store.

Receive notifications about information and event scheduling for Wayne

We encourage you to share your most beloved memories of Wayne here, so that the family and other loved ones can always see it. You can upload cherished photographs, or share your favorite stories, and can even comment on those shared by others.

Bob and Jo Anne Joyce sent flowers to the family of Wayne A. "Pickles" Gessner.
Show you care by sending flowers

Posted Jan 26, 2019 at 10:03am
I knew Wayne for over 50 years and worked on the Chicago & North Western Railroad with him. He was a gentleman at all times. We shared life stories for many hours in the cab of a locomotive. Sorry to hear of his passing.
Comment Share
Share via:
BJ

Posted Jan 23, 2019 at 02:26pm
The passing of a dear loved one, is a difficult experience for family members. Sorry for your loss. It is through the privilege of prayer, that a bereaved family can experience God's love and comfort in the most intimate way. May the family find comfort through prayerful reliance on Jehovah, the God and Father of our Lord Jesus Christ. He invites you all to throw your burdens on him and he will sustain you in this time of grief, because he cares for you. 1 Peter 5:6, 7; Psalms 55:22; 2 Corinthians 1:3, 4.
Comment Share
Share via: 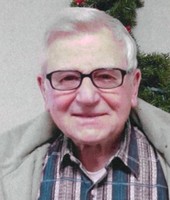