To share your memory on the wall of Robert Stilb, sign in using one of the following options:

A Celebration of Life will be held at a later date.

The family would like to thank the Veteran’s Administration of Milwaukee, WI for all the care to Robert.
Read Less

To send flowers to the family or plant a tree in memory of Robert James "Brutus" Stilb, please visit our Heartfelt Sympathies Store. 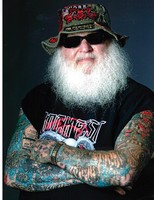